Graph of the Day: Texas Rangers Payroll Breakdown and an open letter to Mr. Jon Daniels

Share All sharing options for: Graph of the Day: Texas Rangers Payroll Breakdown and an open letter to Mr. Jon Daniels 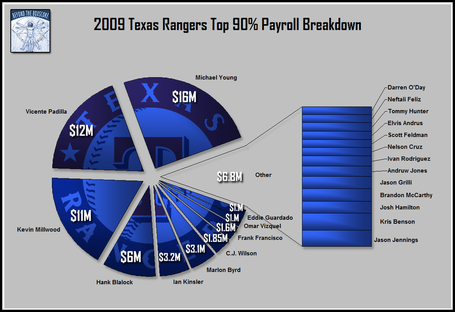 First off, I clearly owe you an apology. I had it on good sources that you were about to sign Mark Prior to a minor league contract yesterday, and I wrote it up as I was breaking down your roster’s value. There’s a myriad of reasons why someone would think of you first when hearing of reclamation projects, as the names Jones, Vizquel, Gagne, and Bradley come to mind. As a perk for future free agent negotiations, you may consider investing in an assisted living facility with short term leases for these players: I would call it the Ben Sheets Baseball Hospice, but it’s just a consideration. Short version, and as I’ve heard frequently by now, you haven’t signed Mark Prior … yet.

But since we’re on the subject, consider signing Mark Prior. No, seriously. And try a conversion to short reliever. I’m not promising lights out (or even MLB caliber), but a healthy Prior (also the definition of a statistical anomaly) could be a ground ball power pitcher, which is a rarity. His fellow brother in the Tragically Abused By Dusty Baker Club: Chicago Chapter has had some middling success with it. You, of anyone in baseball, seem to appreciate the concept of buying low, and you can’t get much lower than this. He fits your needs a lot better than , and it would cost you peanuts. Your catching situation is a huge mess, and it’s sad that it took injury to help sort it out.  Both Saltalamacchia and Teagarden are upside guys (though Salty’s shine is wearing off pretty fast) who need the chance to play most everyday, regardless of their level. Having two young catchers on your roster (both of whom started the season with more value than they have now, thanks to you and Ron Washington) just accelerates the service clock and impedes development. I’d go with Teagarden (if no other reason than defense), but apparently you disagree: you’re playing an awful lot of Pudge recently. When he checks into the Ben Streets hospice, remember that he likes an upstairs room facing west. You can count me among the myriad of fans (well, okay, casual observers) who believed that when your mega-infield of Blalock-Young-Soriano-Teixeira broke up, that there was no chance you would win even 70 games. You’ll have to forgive me – most of us were pretty defense-dumb back then. How a pitching staff can improve when Michael Young and Alfonso Soriano are replaced by Elvis Andrus and Ian Kinsler up the middle is truly awe-inspiring, and John Hart probably wouldn’t have had to have given the GDP of a Latin American banana republic to Chan Ho Park. You aren’t like the Blue Jays … your division war is a winnable one. The Angels are aging, the A’s are a couple of years away, the Mariners are in the midst of cleaning up from an absolute disaster. If Chris Davis can show serious improvement, Josh Hamilton can stay legitimately healthy, and Kevin Millwood doesn’t precipitously decline, you could have a division title in 2010. Just don’t let it go to your heads. And don’t count on another livable year from Andruw Jones.