Graph of the Day: Texas Rangers Value Over Contract

Share All sharing options for: Graph of the Day: Texas Rangers Value Over Contract 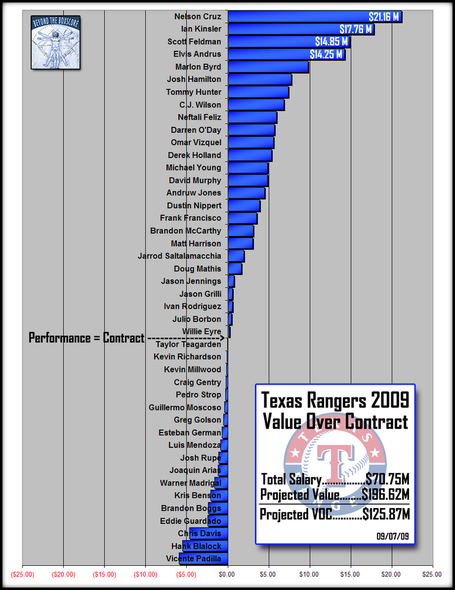 Sabermetrics are simple, and almost universally driven towards a single idea: the separation of one player’s performance from that of his peers. All analysis is based on the idea of prudently addressing scarcity: too few players of the otherworldly talent level required at the Major League Baseball level, too few positions on a team that any can be wasted while expecting success, too little money to get all of the best who are freely available for hire.

The time and effort of so many has been spent addressing how to handle the scarcity of those positions on the baseball field, and their relative talent pool. In fact, it’s what we commonly refer to as "replacement level". How good is he, and how easy would he be to replace?  So let’s address the financial impact of this supply and demand. What should he cost? Is your team getting their money’s worth on an individual level? What about as a group? There are some obstacles to finding out.

Baseball contracts are convoluted and archaic, a house’s roof never replaced but simply layered over repeatedly. There are arbitrators and option years, something called a "super two" and slotting recommendations and apparently five rules relating to player drafts, and minor league options and performance incentives and international free agents. As is usually the case, this bureaucracy is the result of legal toil between workers and those that sign their checks, a decades-long war between lawyers representing those with the money and those doing the work. What we end up with when we glue all the pieces together is sort of a lucrative facsimile of Roman gladiators: win your financial freedom through time and toil.

Despite the difficulties, good baseball players aren’t that easy to replace. This isn’t the NFL. Your first overall draft pick is not anticipated to be a major contributor three months later. The learning curve is simply too high. So in order to replace production immediately, free agency (or in rare cases international free agency) are your only available methods. And free agency costs, as you may have heard somewhere.

This is what Value Over Contract (VOC) attempts to establish:

How much more (or less) is a player is giving their team in free agency dollars versus what his contract is paying him. It is important to be taken in context: if all teams had precisely the same payroll, then the highest VOC team would be the best: this is obviously not true. But with the wild variation, it helps identify payroll efficiency (one of sabermetrics’ earliest stated goals), and also sheds a fair amount of light on just how hard it is to win at this game without money.

So, that being said, let’s look how this works with a team vying for the playoffs, the Texas Rangers:

What a difference 5 years can make in the direction of a franchise. From the shadow of a burdensome contract for the then best player in baseball in Alex Rodriguez, to only two remaining contracts of 10 million or more (with the mercy killing of Vicente Padilla and his 12 million dollars, his color coded burden clearly seen above), the Rangers have put together a team that is worth almost twice what they paid for it, with very few relative disasters to speak of.

1B/DH Hank Blalock – The end of a sad era that symbolizes lost potential, the contract that Blalock signed in 04 expires at the end of this season, and you’ve almost certainly seen the last of him in . Like fellow Texas Ranger Mark Prior, it’s hard to believe he’s only 28, but his story is even stranger. Seldomly do you see the best a player has to offer by a player in his age 23 year, despite some mitigating circumstances that I would not dare suggest. (Did something happen with the Rangers in 03? I remember hearing some talk.) He has 23 HR, but as the numbers on the VOC chart would suggest for a 1B/DH in , big whoop. Chris Davis will have his spot next year.

3B Michael Young – The Rangers are definitely playing with some fire here. UZR was never a member of the Mike Young fanclub when he was a shortstop, and it absolutely hates him at third (UZR/150 suggests he’ll drop to 10 runs below replacement). Few players at this age who show that sort of rapid decline after accounting for a negative move along the defensive spectrum have any good news pending. In addition, he’s having the second best offensive season of his career, which probably isn’t sustainable. For a highly paid 32 year old, he’s burning the wick at both ends and could become a liability by next season … with 3 pretty generous years remaining on his deal. Despite the positive aspects (he has an offensive skillset that ages well), if the Rangers can find a winter trade suitor, they should pull the trigger, even for mid-level prospects.

OF Nelson Cruz – The field-good story of north baseball. His combination of offense, defense and low cost make him a perfect fit for this kind of study, and he deserves his position on the list. He’s so late to the party at 28 that again, especially under cost control when some decent prospects can be netted, it would be wise to shop him around. A loaded talent system gives the Rangers the flexibility to move players like this, making talent begat talent – I can think of a number of teams that could learn a lesson from that.

SS Elvis Andrus – Okay, that was two suggestions of winter trades in a row, so let’s break up the streak. Rangers: unless blackmailed, or you discover Andrus has a methamphetamine problem, or you’re offered the entire Texas League for him, do NOT move Elvis Andrus. The defense is certainly there. The bat isn’t horrible for a shortstop and will develop. Did I mention he’s 20 years old? A quiet superstar in the making and worthy of building a franchise around.

Tomorrow: Salary Breakdown and an Open Letter to Jon Daniels and John Hart