Share All sharing options for: Washington Nationals VOC: Graph of the Day 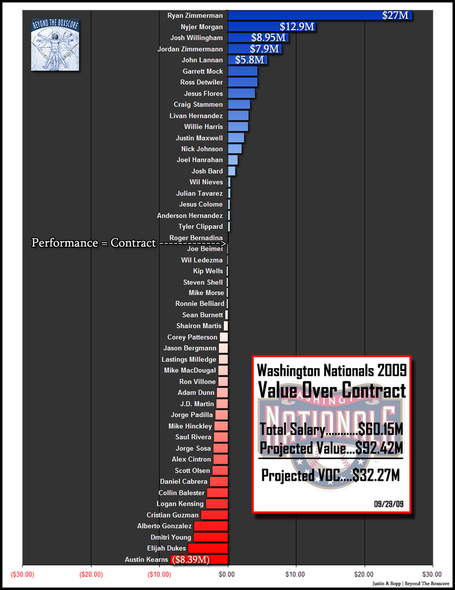 "All of us at Majestic Athletic want to apologize to both the Washington Nationals and Major League Baseball for accidentally omitting the 'o' in two Nationals jerseys," Majestic Athletic president Jim Pisani said in a statement distributed at Nationals Park on Tuesday.

"We take 100 percent responsibility for this event and we regret any embarrassment for the Nationals organization, players and fans," the statement continued.

From ESPN.com, April 23, 2009 - Majestic Athletics must have an awful lot of regret

Pretty much an above average major league starter or position player. Guys in that range include Randy Wolf and Jeff Nieman and Paul Maholm for pitchers, Rafael Furcal, Nate McLouth and Adam Lind for position players. Guys who are solid pieces of winning teams, no doubt. If they're your best player, you're in serious trouble, but they don't actively hurt you and they're just on the precipice of being difficult to replace as you approach the border of the standard deviation from the mean. Not superstars, not goats. Reliable.

Unless ... 3.0 WAR represents something else. Something cumulative. Like say, the entire Nationals pitching staff, All 30 of them that threw an inning this year. .1 WAR apiece. Is this even possible? It is, and it's even worse than it sounds.

In such a case, you'd probably be wise to be incredulous about the data. So you'd consider some possibilities - perhaps a key player was injured, and the high minors were barren of decent fill-ins, and rather than rush prospects, they just took their lump with non-replacement level journeymen so they wouldn't have to give up key pieces. In this scenario, there'd be a player who was embarrassingly bad, driving down the overall numbers almost single-handedly. So you look.

Only it's not true. The worst player posted a -.7. Every other team we've done a VOC study on has had a pitcher worse than that, most of them 2 or 3, relievers or spot starters who tanked and then quickly vanished. But of course, none of those teams had an "ace" who put up a 1.8 WAR either. If your best starting pitcher is half as good as Jorge De La Rosa (3.6 ... no, really), I don't really know what to tell you.

Well, wait. I do. It actually gets worse still. For those unfamiliar with the pitcher WAR calculations, they use FIP, so defense is as of yet unaccounted for this disaster. Of course, more hits from bad defense leading to more runs leads to fewer innings for good starters, so yes, it manages to factor it's way in, and because of the usage relationships between starters and middle and long relievers, those innings were going to (reasonably) worse players.  But somebody was getting those innings. Barring daily downpours in the 6th inning anyway.

I promised I wouldn't bring him up, since he got so much of my loving attention yesterday, but Adam Dunn gave the Nationals -35 runs on defense. So the entire worth of the Washington pitching staff got washed up by one gargantuan clumsy outfielder/first baseman. 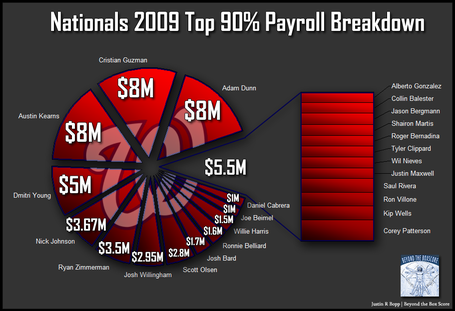 There's enough signs here that things are not going to get better soon. As productive as Nyjer Morgan was for them (especially on a defense that needed it badly), they got both older and more depleted by the trade, not a savvy move for a team this far from contention.

As much as I disagree with ridding the system of the huge potential of Lastings Milledge, I can understand if he was truly a malcontent and a bad fit. Still, the Nationals would have done themselves more of a favor by taking a risk on several younger players, even C grade prospects, and played the odds. Even an 8% chance that one of those players would have panned out in 2014 or so is better than a practically 0% chance that Nyjer Morgan will be productive by then. I think more alarming is that this trade seems to indicate that the Nationals think they are closer to competing than they are, a genuine red-flag for poor understanding of personnel worth, and a probable recipe for a lot of heartache, barring some preternaturally good luck.

Considering the history of the franchise, I wouldn't count on it.