The Two Sides of Adam Dunn: Graph of the Day

Share All sharing options for: The Two Sides of Adam Dunn: Graph of the Day 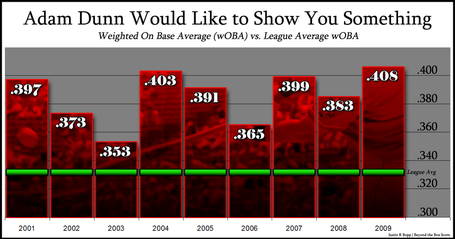 ’"You're not going to succeed if you don't have the talent," Reds general manager Jim Bowden said. ’"The ones with the makeup and the character are the ones who take it to the next level. I don't think Adam Dunn needs any nurturing. You just let him go."...

... Dunn is not frightened by Griffey's recent experiences in the spotlight. Neither is he the type to change his persona to fit fame. ’"I'm not going to change," he said. ’"I'm a pretty loud guy, a pretty outspoken guy."

Example: "Aaron (Boone) would be a great wife if he were a woman."

From the Cincinnati Enquirer, February 26, 2002

It's weird to remember, but Adam Dunn was once highly prized as a prospect as much for his athleticism as his perhaps patient to a fault batting eye and prodigious power. It's a world away from when the Mariners' insistence of his inclusion in the Ken Griffey Jr. trade almost sunk that deal. But not necessarily in a bad way.

Considering their eventual haul in that trade: Brett Tomko, Mike Cameron, Antonio Perez and Jake Meyer, maybe Seattle should have stuck to their guns. But the 235 pound University of Texas backup quarterback became perhaps the most polarizing player in baseball ... and by almost nothing of his own doing. No firecrackers or water bottles thrown into the stands, no notable tirades, no frustrating nagging injuries, no media meltdowns.

Just a frustratingly patient (for a certain baseball element) approach that emphasized walks over singles, and downplayed the negative impact of strikeouts, now a common skillset (as is noted by Mark Reynolds and Jack Cust owning the league records for strikeouts in a season. Of course Reynolds broke Ryan Howard's record that had stood for a whopping 2 years, then broke his own record the very next year.)

But 235 pounds (even a trim, streamlined one, as he was) is relatively heavy for a baseball player. Now at over 300 (as constant rumors, as well as basic evalutation by the naked eye have put him), he's still a pretty good athlete - if in the Nationals are planning on fielding a scrimmage football team for the fall. His top speed still grades out at about league average (it was once well above it in his salad days). But that pesky law of inertia is a fickle one, and with that size the acceleration and change of direction is gone, far and away the more important baseball skills. His tracking fly balls down in the outfield is like chasing an automobile with a freight train: raw mph doesn't really describe why it can't work. 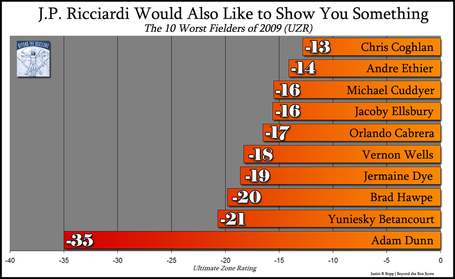 The total UZR chart above actually has Adam Dunn split between two positions: generalized OF (mostly RF, some LF) and a not insignicant amount of time at 1B. The thing is, unlike his body type comparables (say, Ryan Howard and Prince Fielder), Adam Dunn can't hide his failings at the cold corner. Whatever advantage he has for reaching to balls above his head (a pretty low percentage play anyway) are absolutely obliterated by his inability to scoop balls in the dirt, either from throws or from ground balls. He's so completely top heavy that he has an inherent disadvantage to those born with the virtue of just being closer to the ground. This is a pretty definite trend, he has roughly the same power off the bat as when he was 23, only with 60-70 more pounds packed on, his defense has gone from pretty bad to awful to absolutely unacceptable. But is this his failing? He's still a superstar, just playing out of position because he no longer has one. There is, however, a rule change in the American League from 1973 that I'd like to make J.P. Ricciardi aware of.

It wasn't but two offseasons ago that I thought Dunn would make an excellent replacement for Manny Ramirez in Boston considering the eventual probably decline of David Ortiz and the much friendlier dimensions of LF in Boston (one it seems he might have been able to handle as capably as Jason Bay has, at the same age and a little less price). There will be a VOC graph tomorrow about the Nationals, and since I dedicated about a thousand words to him here, I'm going to make that analysis completely Donkey-free. However, pay attention to where he stands ... and let's start a letter writing campaign to see if we can find the Nationals an American League trading partner. For what the Royals gave up for Yuniesky Betancourt*, could they have landed an Adam Dunn to replace the similarly defensively challenged Mike Jacobs?

*Also wanted to point out in the UZR chart above that of the players listed, only Betancourt was acquired primarily for his defense. I think I can let that fact stand on it's own.

This is an unfortunate turning point for Adam Dunn - neither the traditional nor the statistically-leaned are particularly on his side at this point, and it's possible his future is now railroaded to obscurity. But I'm pretty sure there'll be a special place in statistical history for Adam Dunn ... and his 50% of Mike Schmidt style skill set.