wOBA, Walks, and Unlikely Similarities between Un-like Batters - Graph of the Day

Share All sharing options for: wOBA, Walks, and Unlikely Similarities between Un-like Batters - Graph of the Day 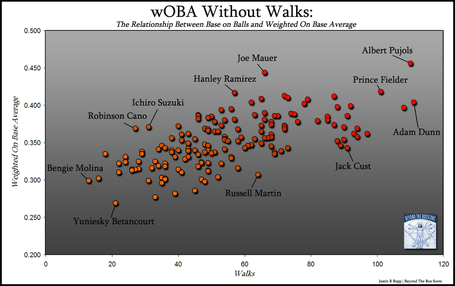 One great success of the sabermetric approach to baseball, other than the growing division between bad sports journalists and people with brains, is the general public acceptance of the walk as a measurable skill and a valuable asset towards winning games. The general argument is that a walk is as good as a hit in most cases, unless there's a man on second and a place-hit in the alley would drive the runner home, or other minor caveats (like clogging the bases).

But has the love for the walk gone too far?

Do sabermatricians, stat geeks, and basement dwellers (I'm referring to both of us, here) value a player like Jack Cust, who is 11th in the Majors in walks but has an otherwise mundane wOBA (90 BB, .343 wOBA), more than a player like Ichiro Suzuki (31 BB, .371 wOBA), who never met a first-pitch he wouldn't swing at?

Of course not. Value is relative, and the pragmatic sabermatrician recognizes that all wOBA are not the same, and that walks are not necessarily the most valuable component of that. So, what is the relationship between walks and wOBA? Can two guys with the same wOBA have different value?

The short answer is obvious, and it is YES! Let's look at two cases from 2009 to date:

In both cases, we have two players with the exact same wOBA (within .001), but vastly different walk totals. Which player, in each case, is more valuable to the team?

In the first, we have a slappy/rangy place hitter in Ichiro, and in Nick Swisher, a low average (.245 career), middling power (.459 career SLG), bad attitude guy (3-inch career mohawk). If you're looking for Swisher's dot on the chart, he's two dots up from Jack Cust in between the two clusters.

Ichiro's talent is swinging at the first pitch he likes and getting on base as quickly as possible. So quickly, in fact, that he's racked up nine 200-hit seasons in a row without earning more than 51 walks in the last seven. Swisher's talent, in addition to that sweet 'do, is working the count. He does have almost double Ichiro's strike out totals, but he is also almost doubling his yearly walk totals.

In the second case, we have a couple guys much closer on paper if not in physical appearance (could they be farther apart physically?). Hanley Ramirez and Prince Fielder both had their first action in the bigs in 2005, though Fielder had the greater time. Ramirez, so far, is a career .317/.387/.533 hitter while Fielder has a career line of .283/.379/.548.

Hanley hits for a higher average and a few less home runs, while Fielder is more reliable in working the count and mashing the ball. Their career lines are fairly close, and their 2009 wOBA are nearly identical. But that one difference, walks, can't be ignored.

So, in both test cases we have two guys with the same wOBA but each has a significantly different plate approach. Now, the questions, which I'll recruit you to see what your take on the issue is. Here goes: