Should the Giants Back Off Tim Lincecum?

Share All sharing options for: Should the Giants Back Off Tim Lincecum?

Last night, Tim Lincecum pitched well but got beat by Carlos Zambrano. What struck me was a difference in peak and overall velocity - Big Z was throwing harder than The Freak.

So, there was probably nothing "in the air" that night pushing The Freak's speed numbers down. Lincecum topped out at 94.3 - that's his lowest peak on record. He averaged 91.4 mph. Throw out the two-seamers and he's at 91.6. Out of Lincecum's 77 PITCHf/x starts, that's dead last. 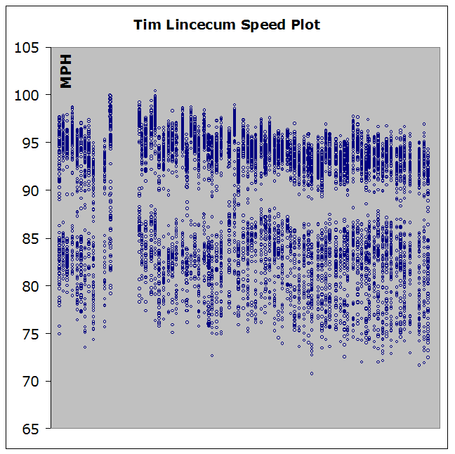 Pretty impressive for a guy without his best stuff. As the Wild Card slips away, it may be time to protect the franchise's most valuable asset.