Share All sharing options for: Zack Greinke Ejection - Was the Strike Zone Different for Kansas City Compared to Boston?

On Thursday night the Royals were facing the Boston Red Sox and Zack Greinke got tossed by home plate umpire Greg Gibson for arguing balls and strikes from the dugout.  Pitching for the Royals at the time was Anthony Lerew, a recent AA callup.  Zack wasn't arguing about a single pitch, more of the general nature of the umpire's calls, as the pitch he got thrown out on was a foul ball. It is hard to hear the exchange clearly from the video, but here is the exchange according to several accounts:

Zack said, "What are you calling strikes?"

Greg yelled, "You know what, get out of here."

I love the Zack, a Cy Young candidate, was sticking up for the new pitcher. Now let's see if Zack's eyesight from the dugout was a little better than Shane Victorino's when he was arguing balls and strikes from the outfield.

Here are the calls from Greg Gibson on Thursday night (thanks to BrooksBaseball.net for the graphics): 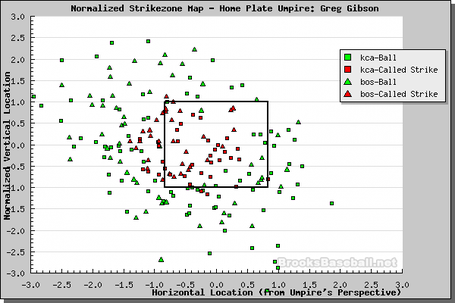 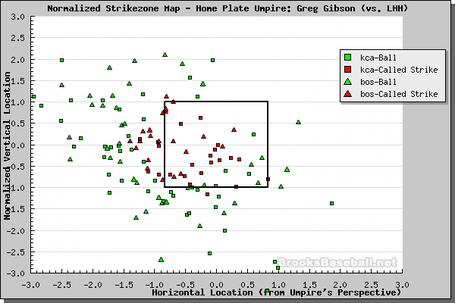 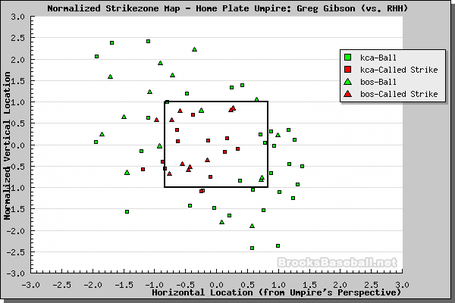 For clarification on the graphs, here is the explanation from BrooksBaseball.net. "These graphs only plot calls made by the home plate umpire. These teams represent the pitching team, not the batting team. As is indicated on the graphs, these are from the Umpire's perspective, not the Pitcher's perspective."

Just looking over the graphs, it doesn't seem that the zone for Kansas City and Boston was much different. What does stick out was how far Greg Gibson's strike zone is adjusted to the left with 1/3rd of the called strikes past the -1 horizontal edge of the strike zone.  Zack did have something to complain about, but at least Greg was consistent between teams.

I went ahead and looked at Gibson's called strikes and balls available from the last 3 seasons.  The data is combined for left and right handed hitters.  I used -1.2 to 1.2 for the horizontal component of the zone in which the umpires are graded on instead of the -1 to 1 that are used in the previous graphics. 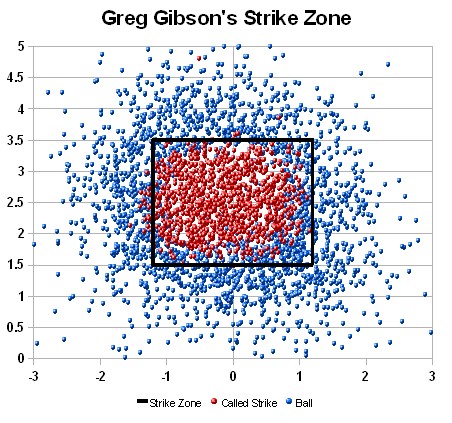