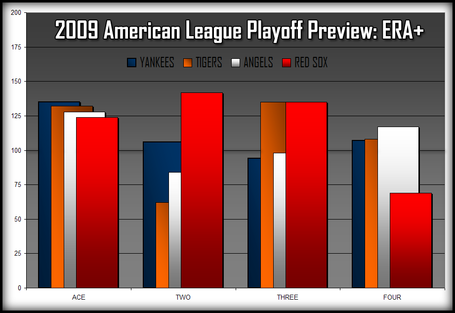 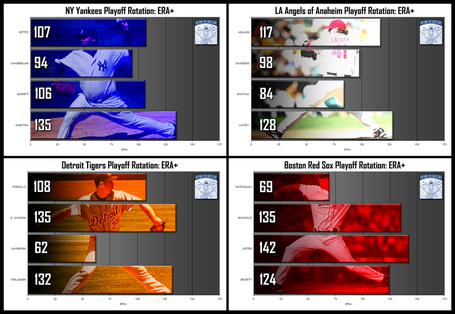 Full charts after the jump.

With somewhere between eleven and fourteen games left for most teams, the playoff scenarios have mostly crystallized and now is the time to anticipate potential staff match ups. Let's take a look. 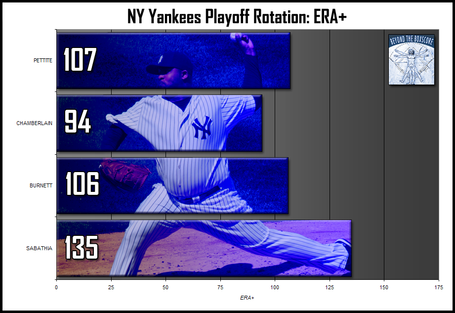 CC Sabathia really anchors the Yankees rotation with a 3.31 ERA+, 1.13 WHIP,  and 3.1 K/BB. He also is only second in the Majors with 220 IP; he'll go the distance and get the game into the hands of their valuable closer, Mariano Rivera. If you want to get ridiculous, check out the Yankee's K/9 for their starting rotation: Sabathia, 7.60; Burnett, 8.19; Pettitte, 7.07. 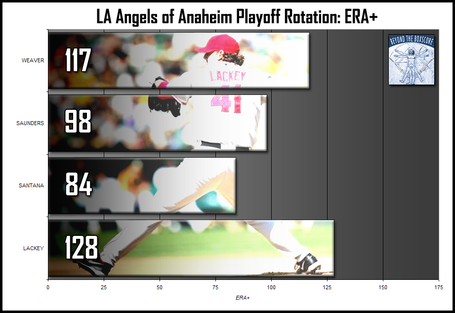 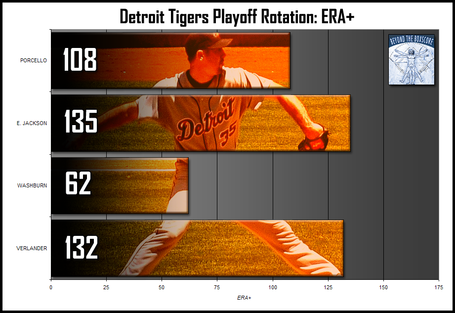 Justin Verlander's roaring season is still underway for the Tigers, and his contribution of an ABSURD 10.15 K/9 will win them almost any game he's in, provided some minimal run support. On top of that, he'll keep the ball in the park with a durable 0.83 HR/9 and leave the game in good shape with an excellent 1.18 WHIP. With Edwin Jackson, Jarred Washburn, and Rick Porcello bringing in the rear, the Tigers have as good of a rotation as any team in the hunt.** 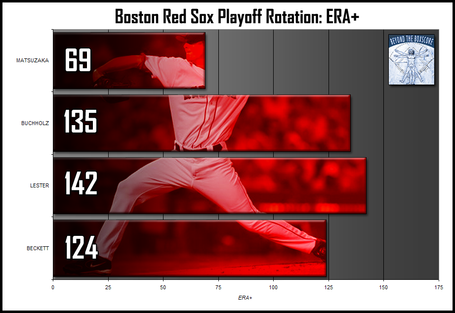 Regardless of which team wins the ALCS, they will have an excellent and deep staff capable of going the distance against any team. In the playoffs, watch pitch counts, as most of these are high-strikeout guys. You'll want the team you're rooting for to get above 20-25 pitches taken per inning so they can get to the less-reliable-but-still-outstanding relief staff most of these teams have. The team that can maintain the most pitches taken per inning while limiting their starter to as few as possible will most likely go the distance. Obvious, but worth stating.

** Assuming the Tigers make the playoffs, of course. As it stands at the time of this writing, the Twins are just 2.5 games back and still have a real chance at this thing.

Updated all charts to reflect ERA+, and while the general shape of things stays the same, it draws several things out a little further: