Share All sharing options for: Los Angeles Dodgers VOC and Payroll Breakdown: Graph of the Day 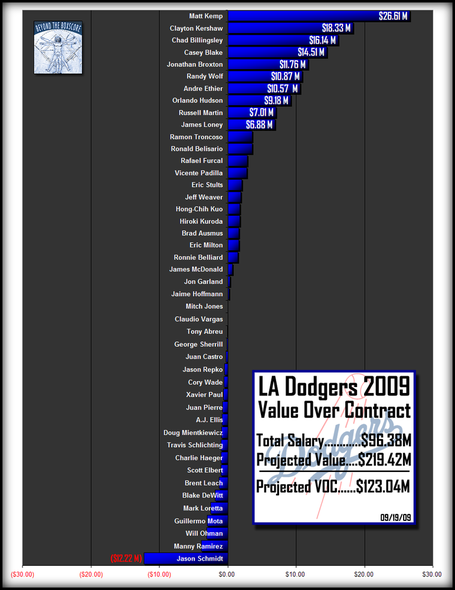 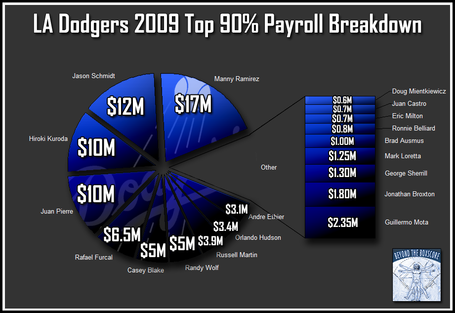 "You know if the player's going to be a good player or not. That's what you really know," said Colletti, who was confident he knew that much about Ethier.

That Ethier would blossom into the top threat on the National League's best-hitting team? Or that he would become the best clutch hitter in baseball? Well, Colletti got kind of lucky there because Ethier has become historically good.

From the LA Times, taking some serious liberty with the definition of historical

This WAR (pun fully intended) is still fought on all sides. And perhaps no bigger immediate threat to reasonable thinking exists outside the fortune of Ned Colletti, who has ridden an almost impossibly talented set of youngsters and a weak division to baseball respectibility. And it's not so much that he's taken all of the credit, so much that it is continually heaped upon him by a certain local paper and a particularly fawning sports editorial writer.

The Dodgers have an odd claim to fame on this particular list, as they are the only team in playoff contention to have their payroll be down from their opening day estimates. The difference? Some unpaid 50 game suspension of a well-compensated eccentric LF that you may have heard something about earlier this summer. Even with that um ... "benefit" towards their payroll numbers, one that teams who lose a highly paid star to injury do not incur (see Rodriguez, Alex, Yankees, New York), Manny just can't offer enough in all facets of the game to be worth that kind of cash, even if the National League had a designated hitter.

One of the frequently debated questions regarding the VOC calculations (or any value metrics, including WAR, VORP, Win Shares, etc.) is the existance of the value of star power and the ability to sell tickets. Is Manny worth more than the sum of his baseball contributions? Ichiro? Ken Griffey, Jr? A few studies indicate that yes, there is some palpable value, but it is paltry compared with winning. In the case of a winning team that also has overpaid superstars, it's impossible to separate. However, the Dodgers are winning, of course, and so the standard thinking goes that it is because of these very players. The mainstream baseball media, of course, does nothing whatsoever to promote this.

The top 3 contributors on this team in terms of WAR are Matt Kemp, Casey Blake(!), and Clayton Kershaw. If Blake weren't having the second best year of his career and were closer to his career norms, the third would be Chad Billingsley. This is the most prominent example we've shown (so far) where the top payroll breakdown tells a much more interesting story than the VOC graph does: The Dodgers young talent isn't complementing their success, it's creating it.

Of the top 5 paid players, 2 are worth their money: Kuroda and Furcal. In terms of WAR, Kuroda is the 10th best player on this team. Furcal 12th. Schmidt is a completely lost cause, Pierre (despite having a season actually above what he projected, and what he had shown in prior years), was a lost cause the minute they signed the contract, and it wasn't bad luck: any due diligence would have revealed that he would be exactly what he is. And of course, Manny. I'm surprised some blind old scout with shingles doesn't get credit for identifying one of the best right handed hitters in baseball history, and after careful deliberation and listening to the plane of the bat swing, deciding that yes, he's a pretty good player.

After 2 straight years of Ned Colletti doing anything he could to prevent his young talent from contributing on offense, they eventually broke through on their own and made it impossible to send them back to the bench or platoon duty. The next couple of years should be a blast to watch, just remember to give credit where the credit is due.