Total MLB Home Runs This Century - Graph of the Day

Share All sharing options for: Total MLB Home Runs This Century - Graph of the Day 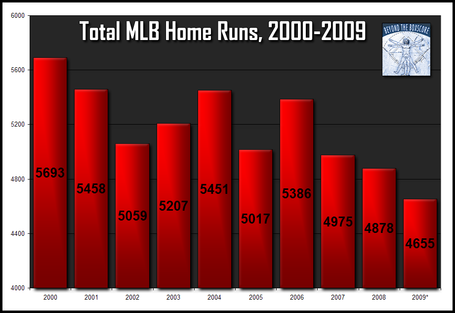 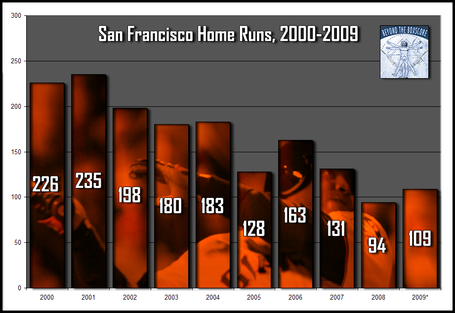 The second in this continuing series, This Century, we see another standard counting stat drop significantly over the past 10 years. This time, it's home runs dropping from the 2000-2004 average of 5400 drop to a 2005-2009 average of 5000. Shocking on its own, but 2009 looks to have a more-than-300 home run drop from that. That's flabbergasting.

What changed? (more after the jump)

I submit to you the following:

Obviously, they represent a fraction of the Major League's power recession, but that San-Fran chart above certainly eerily mirrors the MLB chart does it not? What gives? One could make an argument that the mirror is merely a reflection of the renewed focus on sabermetric principles from front offices on their pitching staff, but wouldn't they also use that to help their batters? I could dance around the topic all day, but the truth is that it's probably just regression to the mean. Right?