It's another down year in the North Side.  The Cubs are barely above .500, and Murphy's Law appears to be in full effect once again.  Perhaps the biggest disappointment of this season for the Cubs has been the inability of Milton Bradley to adjust to life in Chicago.  The Cubs knew they were taking a risk with Bradley, as the slugger's long list of injuries and attitude problems hardly needs to be listed here.  Now, Bradley's season is over after the Cubs suspended him for the season on Sunday.

It's not injuries that have brought Bradley crashing down to earth after a remarkable season with Texas last year.  Bradley's played in 124 games so far, 2 fewer than last year.  Bradley's wOBA fell 78 points from last year, a difference of over 30 runs in a similar sample size.  His traditional statistics look especially poor, as Bradley's .257 batting average, 12 HRs, and 40 RBIs have drawn the ire of Cubs fans.

Given Bradley's less-than-affectionate comments regarding Cubs fans, it's not likely that he will be back in Chicago.  With that as leverage, some opposing GM will likely be able to land the fiery slugger without having to pay a large piece of the 20 million dollars remaining on the last 2 years of his contract.  Regardless of whether or not the Cubs jettison Bradley, someone as talented as him will likely find playing time on some roster.  What should Bradley's next landing spot expect?

To put it succinctly, they should expect a productive player.  In what was quite easily his worst season as a hitter since becoming an everyday player in 2002, Bradley still put up above average numbers.  Bradley doesn't need to post impressive batting averages to be productive because he walks at a tremendous rate.  This year, he's walking in 14.4% of his plate appearances.  His IsoD (Isolated Discipline, OBP-AVG) remains staggering, this year at .121.

That isn't to say that everything is right with Bradley.  Obviously, any drop of 78 wOBA points is alarming in some fashion.  What's alarming here is the precipitous drop is Bradley's power.  His SLG dropped from .563 to .397, and his IsoP (Isolated Power) dropped from .242 to .140.  This is   almost singularly the cause of Bradley's unfortunate season.  As a player who has stayed relatively consistent with his walk numbers (especially since 2002), power production will shape a lot of Bradley's productivity at the plate. 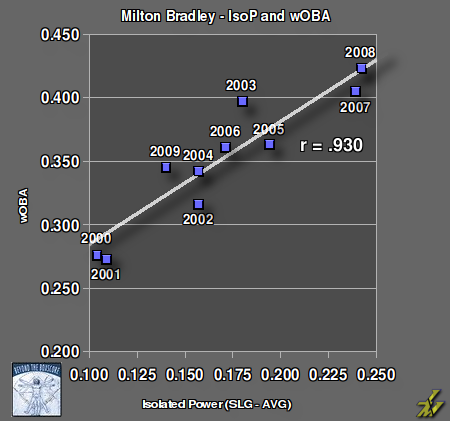 Bradley's big power drop stems from a 10% drop in HR/FB and a 5% drop in LD%.  Both those statistics were above his career norm, and have fallen below this year.  We should expect some improvement in both those categories next year, which should result in a power rise and a production rise.

Bradley is 31, and as such we shouldn't expect him to make any great leaps forward.  Still, based on his last two years, he's probably better than a .345 wOBA hitter, which is already above average.  He can produce as a DH in the AL, and his UZR of -1.0 in RF along with his positive career numbers suggest that he's not a burden in the outfield like the other "DH types" who were on the market this past winter, such as Pat Burrell and Raul Ibanez.  Even if his production remains at its current level, some team could use his services, and he's much more likely to wOBA around .370 than the .345 he's at this year.  He's been worth 1.3 wins in what is easily his worst season, and profiles as closer to a 2.5 win player next year.  Some team with a need in the outfield or at DH should take a look at Bradley - it won't be costly and the benefits could be enormous.