Share All sharing options for: Team WAR vs Actual Wins

I was doing some work on projecting WAR of players and using that information to predict how many games a team might win in a season. Once I got that information, I wanted to know how well the WAR values correlate to actual team wins. Using Rally's WAR database, I took all the teams since 1980 and plotted their actual wins versus the WAR of all the team's players (plus the 48.6 wins for a replacement level team).  Here is the results: 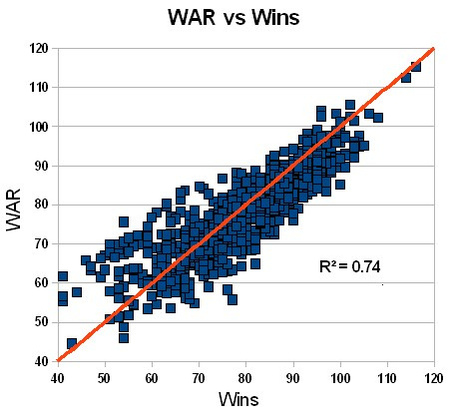 Besides the graph, I determined the standard deviation of WAR projected wins (WAR plus replacement level wins  - 48.6) minus actual wins to be 6.5. So 66% (one standard deviation) of the teams, 20, should be within 6.5 wins of the teams total of sample and 95% of the teams, 28.5, should be within 13 wins. So it a team has its 48.6 wins for at least being a replacement level team and 32.4 additional WAR from its players, it should have 81 wins according to WAR. Actually this team has a 66% chance of winning from 75.5 to 87.5 games or a 95% chance of winning 68 to 94 games. No eye-popping numbers here, but hopefully someone else will find it helpful and not have to do the work I did.

There was discussion in the comments and I decided to put up a better graph of the data with a 1Win:1WAR line for reference.  Here is the original graph: 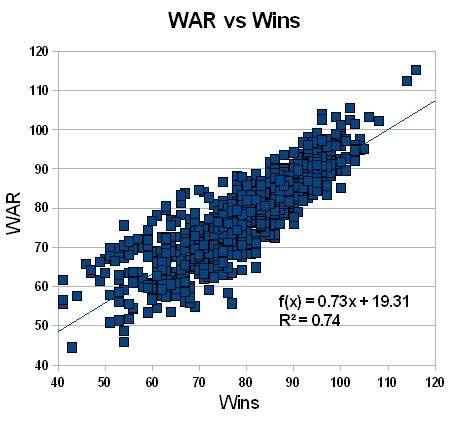