Share All sharing options for: Daily Box Score 9/16: The Elasticity of Groundball Ratios

"Oh, great!" you're thinking, "here goes Tommy on another one of his ill-fated mathematical boondoggles."

Well, yeah, but calm down. This one should be relatively painless. There is only a very little bit of math. And a tiny bit of calculus. But PLENTY of errors, I promise. Still with me? Okay, then, let's go.

A Curious Mind
Groundballs
Discussion Question of the Day

I was (am) the kind of student in school who was always thinking about math during economics class, philosophy during history class, physics during biology class, and (dear lord!) anything else during 11th grade English.

So, as I said, my mind wanders. And this was definitely true in Econ 1. I began to think about the relationship between the slope of the demand curve (which just plots price vs. quantity demanded of a good) and price elasticity of demand. It should be clear that they are not the same, but it should also be clear that they are related. When you do economics with calculus, it turns out the right answer for price elasticity of demand as a derivative is:

This formula just tells us that elasticity is the slope of the demand curve times the ratio of price to quantity (the negative sign is just a convention, you can more or less ignore it). What do we learn from this exercise? We learn that, although elasticity often looks like a straight line (because you can read it from the often-linear demand curve), it is in fact not a linear formula at all. In fact it's sort of messy. So you can have different elasticities for different starting points on the demand curve, even though the demand curve itself is perfectly linear.

Groundball rates are typically reported in two seemingly similar ways. The first is groundball rate (or GB%), which is just the percentage of all balls in play that were on the ground. You can think of this as equivalent to K% or BB%.

The second way is as a ratio with fly balls. This, more common, formulation is expressed simply as GB/FB.

Dave Cameron, over at Fangraphs, takes issue with the latter metric:

Take Lenny DiNardo, for instance. He returned to the majors last week, being called up by Kansas City to fill a hole in their rotation down the stretch. DiNardo’s primary skill has always been an ability to rack up groundballs, and his first start of 2009 was no exception. In fact, if we looked at his 8.0 G/F rate, we would think that hitters were pounding the ball into the ground all day.

They weren’t, however. There’s an additional batted ball type – line drives, and DiNardo gave up six of them. When you include those in the balls in play denominator, his GB% is 53.3%, which highlights the fact that he got a majority of groundballs but doesn’t suggest the same crazy performance than an 8.0 G/F rate implies.

This is a good point. Line drives matter. So do infield flies, for that matter.

Building off of Cameron's point, Tom Tango jumped in to dump on GB/FB for a different reason, though:

Using GB/FB in a linear formula would definitely be a big mistake. I'd like to illustrate Tango's point graphically. (You'll forgive me for not having the wizardry of Justin and Walter.) Here is GB/FB versus GB/(GB+FB): 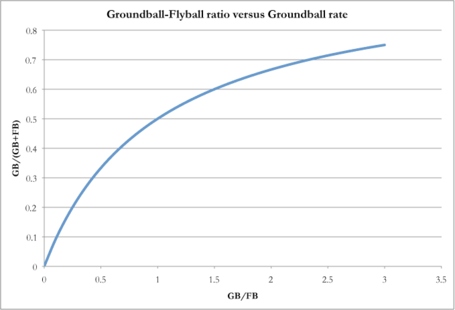 Now, it shouldn't be surprising that there is a limit on GB/(GB+FB). In fact this function has an asymptote at 1. But that is what we want--groundballs aren't the kind of result you can keep racking up. The best a pitcher can do is have every ball in play be a groundball, which would be 100% GB%.

Anyway, all this reminds me of the lesson I learned from elasticity. It may look as though GB/FB is a reliable statistic that can be easily pigeonholed and compared, but it isn't. That doesn't mean it's not useful, it just means the math is a little more complicated.

What explanations can we come up with for why GB/FB has persisted so much?