The last great goal of 20th Century science which continues to this day has been the pursuit of a unified theory of everything that somehow ties quantum mechanics in with particle physics. At least that's my Discovery Channel version. Regardless, I'm not sure how the great minds of our time are coming along on that.

It is much the same for those that pursue the great art of baseball math, Sabermetrics. Infinitely more humble, no doubt, but the relentless pursuit for a unified stat remains there all the same. One magical number that JoeFan can look at and say, "Yes, Tony Pena Jr. is the 278th best player in the Major Leagues that qualifies for a batting title."

Well, this is not that. Rather than attempt a unified stat, which many have tried, I was inspired the other day by Tommy Bennett (BtB Contributor) to come up with and design a visual way of looking at the big picture for batters. I think we might have something here.

The first step was to determine what represents the overall view of a batter. Fairly simple, just from a 5-tools perspective. Hitting, Power, Base-Running (skills and speed), Throwing, and Fielding.

The second step was to determine which stats we have that best reflect those tenets of baseball lore. On Base Percentage (OBP) makes sense for hitting, of course, as does Isolated Slugging (ISO) for power. For base-running, we can use EqBRR, which is currently the best measure. For fielding and throwing, we'll use Ultimate Zone Rating (UZR/150). All told, we lowered it down to four stats but will have to deal with some wonky stuff for catchers and DHs and what not.

Now, some problems arise from this method, which are currently being sorted out. The first is that certain stats are dominated so thoroughly by a single person, like Pujols and ISO, that his 100% puts the next-best person at 85%. The best solution for this is to set the percentages to a bell curve to properly represent the spread of talent in the MLB.

An additional issue with this current method is exactly where to set the zero. One player, Adam Dunn, is such a bad fielder that our initial calculation netted a -27%! This looks hilarious in graph form, but may not be very useful.

All that being said, with an acknowledgement for opportunity to improve the results for a more representative output, I present to you the DiamondView Composite Player Evaluation. It's a visual representation of the current best 4 stats we have for batters. For presentation purposes, we chose batters at or near the top of particular stats to show exactly how effective this view is for quickly determining a player's strength's and weaknesses. It's really quite amazing when you see it coming together.

In that vein, I wanted OBP Power Guy, low-avg power guy, slappy-hitter/stolen base guy, and the high-defense utility fielder guy. Our current results are a first run, so feel free to help us through the growing pains with suggestions. Take a look: 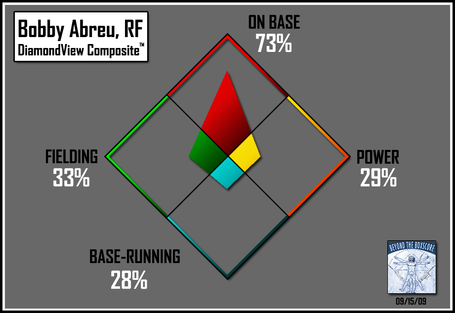 Bobby Abreu is a classic On-Base guy that can't really hit for power and may be a liability in the field. 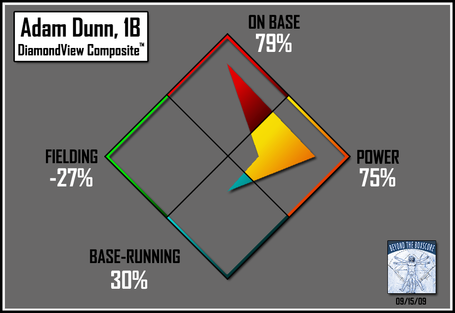 What can be said about the Donkey, Adam Dunn, that hasn't already been said? This shows you exactly what he is. 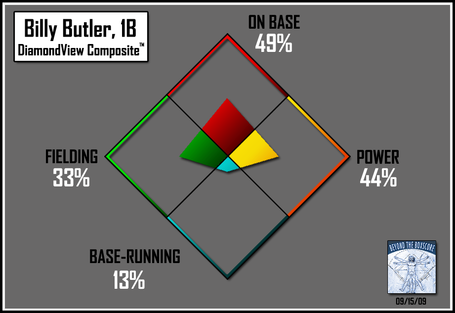 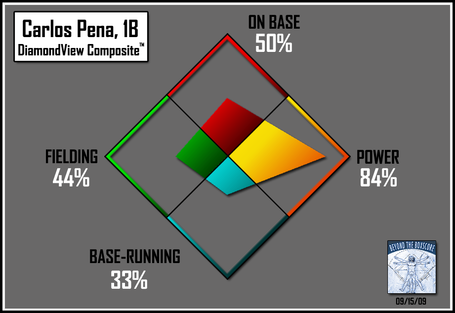 This is probably my favorite one. Carlos Pena, when he hits it, hits it HARD. 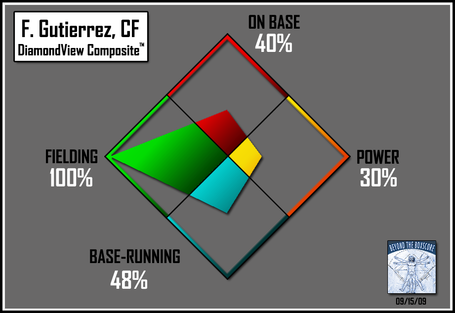 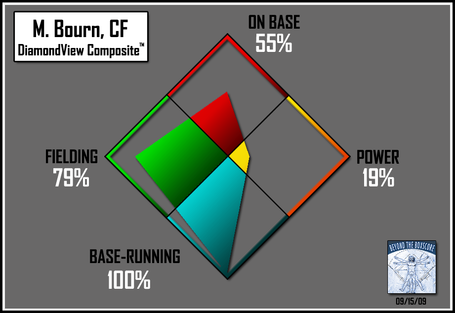 There is something to be said for Defense and smart base running (and Michael Bourn's lights out speed). 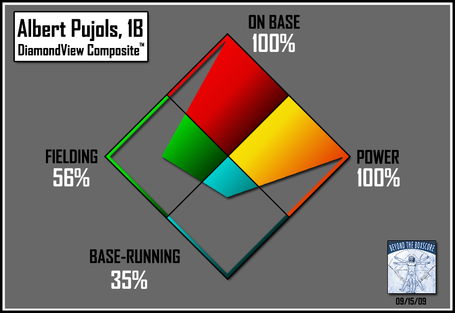 Ahem. Albert, you're messing up my graphs. 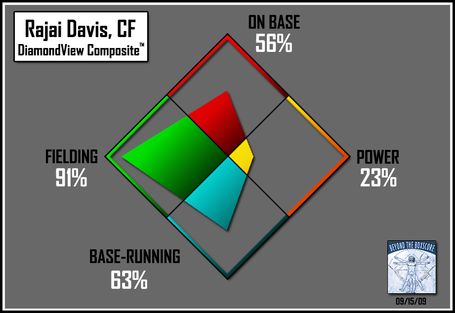 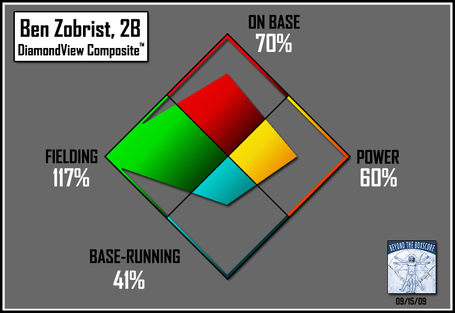 Let us know what you think.

**It's here that I should note how important Walter Fulbright has been to this and every article that I write here. What little ability I have for making charts is comparatively worthless for the toddler-in-the-ocean I am with Sabermetrics. I try, but simply cannot do it alone. If you have a chance, please acknowledge where you can that it is only with his statistical analysis that most of this is possible. Thank you, Walter.