Share All sharing options for: Houston Astros 2009 Payroll Breakdown and Value Over Contract - Graph of the Day 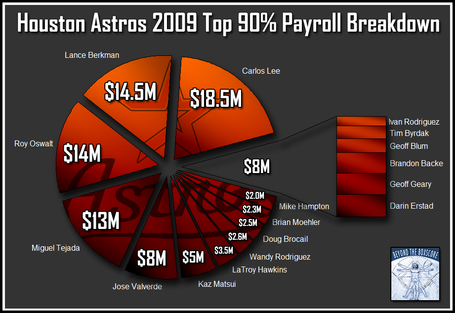 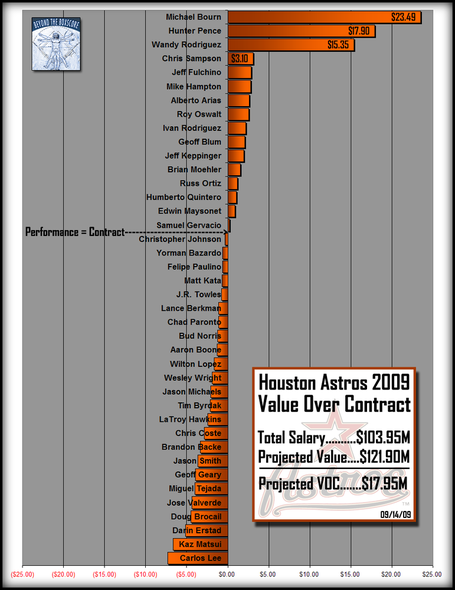 Analytical and emotional breakdown after the jump.

From MLB.com article on Michael Bourn:

There comes a few times in the game of advanced (or even just garden variety reasonable) baseball analysis, when you sort of forget where the mindset of the average pundit is, and then you read this, and you remember: this is what you’re up against. An article praising (rightfully) Michael Bourn’s career growth in 2009 specifically mentions that the most evident gain is in batting average with runners in scoring position. For a leadoff hitter. In the National League.

If the thought process behind building the Houston Astros was in any way similar to this nugget, it’s pretty easy to understand why they’re a mess. The minor league system is barren, the talent is overpaid and old and I’m pretty sure even the ticket takers have a guaranteed contract with a no-trade clause. Just take a look at the Astros players playing with that benefit:

The average age of these four players? 32.75. The total projected value of these 4 in 2009? 39.51 million dollars. Their salaries? 52 million. Only Matsui gets off the hook after next year, and he’s the littlest fish in this pond, investment-wise. Every single other one of these guys is going to hang around. Carlos Lee’s contract is probably unmovable now, and by the time 2010 ends, it almost certainly will be.

I don’t know how deep the Astros pockets can possibly be, but if they don’t want to double their payroll for 2010, they almost certainly can’t win An inflexible, aging payroll, no ability to sell for talent to rebuild, and no cheap in-house replacements is basically a perfect storm of poor roster building. There are pretty good indications from Houston that the fanbase and ownership understand this, and won’t hold Ed Wade responsible for this mess, but are they going to be patient enough for what is probably an 8 year rebuild? I hope hometown favorite (and likely rebound candidate) Lance Berkman is enough to keep them sated in the meantime.

Well, there is one possibility for easing the financial burden. Carlos Lee has a nominal weight clause in his contract. Perhaps the most prudent immediate use of funds by Mr. Wade would be to give his left fielder an unlimited line of credit at Luby’s.