Who is Seth Smith?

Share All sharing options for: Who is Seth Smith?

Once again, the Colorado Rockies success is the major story of the National League playoff race.  At the time of this writing, the Rockies currently sit 2.5 games in front of the San Francisco Giants for the NL Wild Card lead, with a record of 82-64 after opening up 18-28, with playoff odds below 1%.

A big part of the Rockies' good fortune this year has been the emergence of Seth Smith.  At 27, Smith has emerged as a producer at the big league level after two insignificant major league stints in the previous two seasons.  Smith's impressive stats above have impressed both traditionalists and sabermetricians alike. His .402 wOBA currently ranks 13th in the entire major leagues among players with 345 or more PAs (the amount Smith has as of Tuesday night)

Smith's contributions haven't been limited to the batter's box.   In 75 games as a LF, Smith has posted a remarkable +7.5 UZR (+18.4 UZR/15).  Smith's .913 RZR ranks favorably as well, and would tie for third in the league if he were qualified.  However, these numbers should be taken with a pound of salt, due to a small sample size and the fact that Smith did not have anything more than an average COF defensive reputation coming into the league.

Of course, thanks to our sample of slightly over 450 PAs and 75 defensive games, we're hardly any closer to answering the title question than we were before the jump.  Smith's 139 OPS+ is exciting, and for very good reason.  Still, a lot can happen in 375 PAs (Smith's 2009 total).  There's an even greater magnitude of uncertainty in Smith's defense, as UZR is known to have large measurement error, especially in samples of smaller than a full season.  So, once again, I ask: Who is Seth Smith?

Despite the small sample size, it's clear that Smith has the ability to produce with the bat.  Although Smith's season to date is certainly remarkable, his minor league numbers suggested a high level of offensive talent.  Even in his first professional season, Smith showed above average on base and power skills, and showed improvement each season as he worked his way up the organizational ladder. 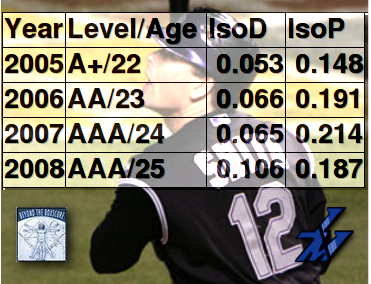 Smith was a bit above average for his age at each of these levels, but not by an alarming amount.  The increase in power in 2006 would make any scouting director's day - it's the difference between Melky Cabrera and Matt Kemp this year.  After 2007, Smith had a solid argument to start 2008 in the majors, but he would remain in Colorado Springs for one more season. The increase in Isolated Discipline (IsoD) that Smith showed in 2008, along with retaining high power numbers, removed all doubt that he was ready to test his skills against a major league pitching staff.

Smith has not been able to maintain the 15.6% walk rate that powered his .106 IsoD in 2008, but a 12.6% walk rate against major league pitching is fantastic.  As a result, his IsoD is at a solid .085, well above his pre-2008 minor league numbers.  Much like Marco Scutaro, who also has turned a tremendous walk rate into a career year, Smith is a selective hitter, only swinging at 40.5% of pitches against a league average of 45%.  Between this year and last year in the minors, Smith appears to have true talent for reaching base, regardless of whether or not the ball is bouncing his way.

What may be more questionable for Smith are his power numbers.  At .236, his ML ISO is over 20 points higher than his minor league career high.  His 15.7% HR/FB rate is above average, but it's within 1 standard deviation of the mean, and as such it is certainly a reasonable rate to expect out of a hitter playing in Coors' Field.  The more likely culprit for his higher power numbers is the .346 BABIP he's sported entering play on Tuesday.  BABIP suggests that more hits are falling for Smith than we would expect in his average sample, and as such he may have had more doubles fall as well.  As Smith doesn't appear to have any particular skill connected to posting a high BABIP, like an Ichiro-type player, we should expect some regression as he goes forward.  Still, StatCorner's wOBA* doesn't expect heavy regression, rating him at a still-stellar .398.

The real question for Smith as his career goes forward is his defense.  Smith's scouting reports suggest that he would be an average corner outfielder at best, whereas his +7.5 UZR in LF suggests he could possibly be an above average center fielder.  His minor league numbers tell a completely different story.  Thanks to www.minorleaguesplits.com, we can see that Smith's poor defensive reputation coming into the majors was perhaps optimistic.  Between 3 levels and 4 years, Smith compiled a total of -59 totalZone runs below average.  I would be shocked to see Smith continue to compile good fielding numbers in the majors, and would expect him to regress towards average if not below.

Still, Smith appears to be fully capable of posting wOBAs near .400, if not at or above that level.  If he continues to do that, the Rockies will quickly run out of excuses to keep him on the bench.  Given the chance, he could evolve into one of the league's superstars.