MLB 2009 Attendance Comparison I - National League - Graph of the Day

Share All sharing options for: MLB 2009 Attendance Comparison I - National League - Graph of the Day 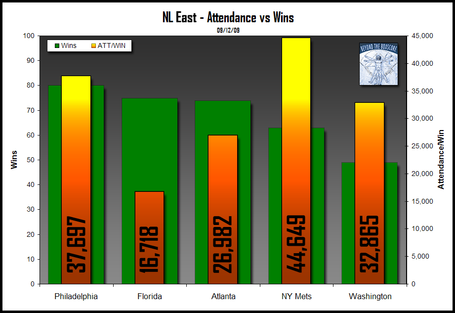 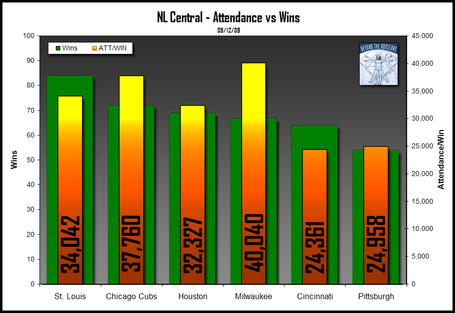 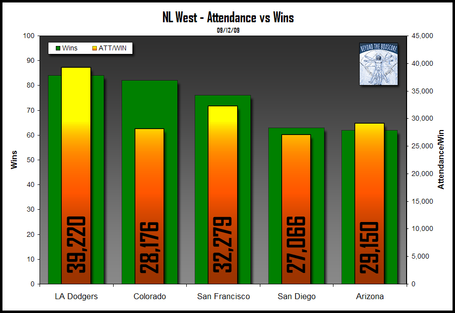 The larger the gap (exposed green or exposed yellow) the bigger the difference between success and attendance.

In some things, we believe too strongly. In others, our belief isn't quite strong enough. Politics, Religion, Sex. Which game console is the better choice. Other banned talk around your mother-in-law's dinner table. We either follow blindly and are punished -- or we are cynically pessimistic and miss out on the benefits.

This too is true in baseball, though it's probably a safer bet for table-talk than discussing the intricacies of Health Care and whether or not we're going to kill Grandma off.* It's not as polarizing as said topics, certainly: there's a fairly direct correlation between team success and the attendance the team enjoys each season. (more after the jump)

* I was thisclose to coming up with an intersecting line chart to show exactly when it's time to kill Grandma off, incorporating some choice quotes from Golden Girls and references to AquaNet hairspray, but I just never know with these things. Maybe another time. 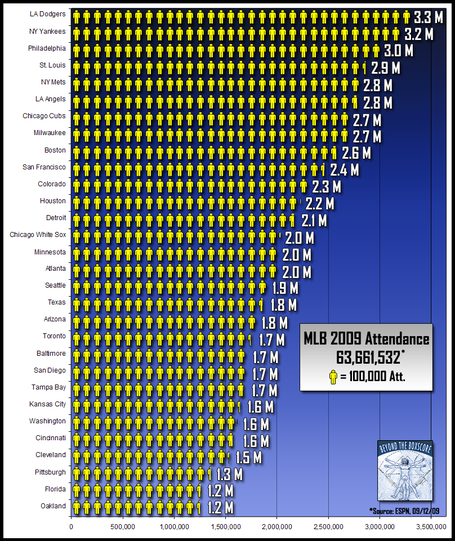 If you look at the 2009 total attendance chart above (click to enlarge), hopefully you'll notice the Dodgers, Yankees, and Philly at the top, and Oakland, Pittsburgh, Royals, and Washington near the bottom. That makes sense, right? Baseball fans are more likely to support a winning product.

It is with that assumption I approached the following questions: Which teams are fans supporting despite a lack of success? Which teams are playing decent ball (a chance to see your team win half the time) and are not being supported by its fans?

Today I will focus on the NL. Tomorrow, the AL. Here's what I found:

It's important to note that we still have a few weeks to go before the end of the season. However, the trends are clear. The good teams have the most attendance. The bad ones have the least. Where are the discrepancies?

*It's about here that I should justify using (Wins vs Attendance/Win) instead of (Wins vs Total Attendance) or (Wins vs Average Attendance). The benefit of using Attendance/Win instead of Total or Average is to establish the not-so-obvious non-correlation between wins and attendance. By using Total vs. Wins, we get two lines that are generally parallel, while Wins vs. Attendance/WIn draws out the differences at the top and bottom. One flaw in this method is that it could unfairly benefit teams with very few wins or unfairly punish teams with many wins.

This may or may not be overzealous 'metricity, so I'm open to criticism and ideas for method improvement. The results, however, bear out the current method showing giant swaths of green or orange sticking out where there should be very little.

By putting team wins up against attendance/win (and keeping the same scale for each division), large differences in the win-to-attendance ratio appear quite easily. The absolute best case in either the AL or NL studies is Florida. Barely 5 fewer wins than Philly as of this data's collection, but less than half the attendance. Now, this is nothing earth shattering, as it is widely recognized that Florida hates professional baseball as much as it loves not killing off Grandma. However, it is worth noting what a decent product they are producing, comparatively, than that of their competition and just how few people give a damn.

In the same breath, and in the same division, it's worth noting how well MetsFan has supported his or her team despite a disastrous and injury-plagued season. They're the 5th-best supported team in all of baseball and only have 63 wins heading into the third week of September! A more cynical owner (Glass) would spend less and bathe in the overage.

The last stumper of this NL side of the study is Colorado. What's going on up there? Is DenverFan so pissed off about Big Baby Cutler's departure that they've decided to stay home? WHAT ARE YOU GUYS DOING? Only three games back from first and currently leading the NL Wild Card Chase...and that's it? We all remember your bandwagon fans a few years ago in the Series, but this is sad. You have about 3 million people 8-9 hours to your east that would KILL for a .500 team right now, much less one in the chase.

Stay right here for the AL side of the story tomorrow, and let me know what you think. I'm expecting criticism of the Attendance/Win thing because I'm having doubts of its superiority over Total or Average despite my earlier defense. In fact, I'd prefer criticism so I could dismiss it out of hand. The way this came together was through many interruptions over the course of a couple days, so I may have (no, definitely) lost my train of thought. - Justin