Total MLB Complete Games This Century - Graph of the Day

Share All sharing options for: Total MLB Complete Games This Century - Graph of the Day 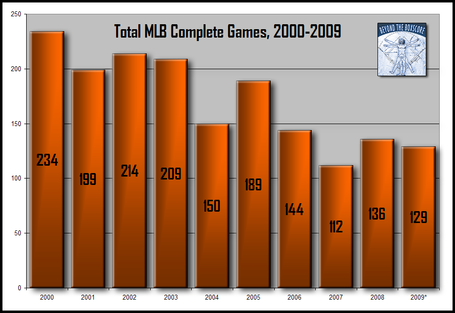 Over the past decade, the average number of complete games has dropped from the 2000-2005 average of 199 to the 2006-2009 average of 130. Granted, 2009 still has several weeks left, but it's not likely to move this average or change the obvious trend: there are 35% fewer complete games over the past four years compared to the previous six.

What changed? (more after the jump)

I submit to you the following:

Certainly you remember Rany's Pitcher Abuse Points and the exposure of Dusty Baker as an arm-murdering psycho, right? That was published in 2004 (after an original study in 1998 and 1999), and if we take out the spike in 2005, one could argue that Mr. Jazayerli finally convinced managers to stop turning their pitcher's arms into sausage. But why would they suddenly accept that message after years of pitch count debate?

Perhaps there's another explanation? Anybody remember what happened in the spring of 2006?

Whichever reason, there has been a significant drop-off in complete games in just the past 5-6 years. The conclusions are simple: either pitchers can't go as far or managers won't let them. The implications are interesting, though, and just as simple: with fewer complete games, more pitchers per team are needed...or managers will have to find ways to extend their middle and long relievers.

*Walter and I have had fleeting discussions over the past couple years about the wacky idea of an all-relief staff, or an only-starter staff (where the next starter would come in whenever needed), or splitting the game in half and have two "starters" per game. Useless, but fun to think about.

This originally started as research on the Royals and Zack Greinke, attempting to discover how historic it was to almost lead the league in team CGs but be in the bottom 4-5 in terms of wins. Here's what I found:

Notice that the Rays, Tigers, and Cubs all appear twice. Also notice that all of these teams concluded their sad campaigns before 2005.

2. Despite the above, the average number of wins for every team with 9+ complete games is between 82-83.

Why is that weird? Because the Royals, in all their negative UZR and OBP-bleeding glory, have compiled 9 complete games mostly on the back of Zack Greinke, but have only mustered 54 wins (the first team since the list above to approach that level of sad sack ineptitude while having that many complete games).

With only three or four weeks to go, the Royals will be the first to do this in the new era.