Derek Jeter reaches base for the 3736th time!

Share All sharing options for: Derek Jeter reaches base for the 3736th time!

Subtitle: What? Was There Another Marker I Should Have Used?

As I'm sure everyone has heard by now, last night Derek Jeter went 3-for-4 and tied Lou Gehrig for the most hits of any New York Yankee. However, I was not fully impressed! Inspired by Tom Tango's insistence that these things called "walks" and "hit by pitches" count, I wanted to take a look at Jeter's standing among the Yankee greats in the most counted of counting stats, Times On Base!

The leaderboard and other stuff after the jump.

Here's the leaderboard, thanks to the always useful Baseball-Reference. If you're too lazy for even that, here's my snapshot of the relevant list. 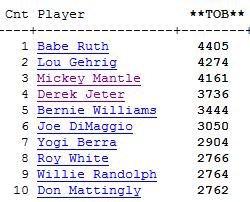 Jeter ranks fourth on that list, a pretty impressive feat given the names that surround him. He is, however, quite a ways behind the three men in front of him, so we won't be celebrating any Yankee milestones of this nature for another two years.

His OBP is also pretty good, in case you didn't know. 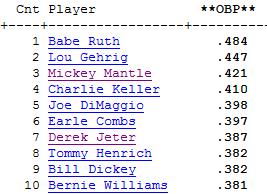 Jeter ranks sixth in that category, behind the four legends of Yankee history, Earle Combs, and Charlie Keller. Obviously, the difference between these two tables is that Jeter is second in Yankee history in plate appearances, logging 9725 PA as a Yankee. He's one of five Yankees to have 9000 PA wearing pinstripes, and the only man ahead of him is the great Mickey Mantle. There's a pretty good chance Jeter will end his career with the most Yankee PA in the team's history, whatever that's worth.

Finally, let's look at the overall leaderboard in times on base, and see if anyone's going to make that record anytime soon. Here's the leaderboard, and here's the top 10. 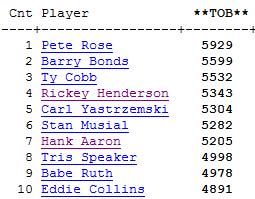 I think it's safe to say no one is making this list. If Babe Ruth is 9th on the list and Barry Bonds is second and 330 times on base behind the leader, then I think we can forget about a "Chase for 5929." Plus, it's such an ugly number. Thanks, Pete Rose!

Instead, let's just assign a round value to try and get to make a Hall of Fame case. There are 24 players who have over 3000 hits, and that seems to be a nice enough marker for voters nowadays. How about we aim for the elusive 4000 TOB club, to which only 38 players can be considered a member (we can also make it 4500 TOB with only 16 members; that's even more exclusive than the 3000 hit club!).

Well, now that Jeter has tied Gehrig, you thought there would be a doldrums in terms milestones/records for Jeter to chase. You were wrong! Congratulations to Derek Jeter on a milestone reached, and now on to the march for 4000 times on base!