Analysis of a Fire Sale: The Pittsbugh Pirates, Pt.1

Share All sharing options for: Analysis of a Fire Sale: The Pittsbugh Pirates, Pt.1

As a lifelong Florida Marlins fan, I've long since known the fan base-breaking power of the classic fire sale. Your favorite players disappear to contending teams, the farm system is brought up en masse to replace them, often times bringing players with "promise" but yielding minimal results, the media backlash that comes with such a dismantling. So I know how Pittsburgh Pirates fans must feel. It is an agonizing thing to see your team unravel before your eyes, bringing nothing tangible in return for years to come.

Fans of the Pirates are used to this, but they may not have seen such a large scale dismantling of the kind GM Neal Huntington has orchestrated this season. Over the course of the year, Huntington has traded 10 players away, seven of whom were either starters or significant contributors to the major league club during the season. The haul Huntington has amassed in return certainly has proved plentiful; 18 players have returned from the Pirates' trading spree, only six of whom have seen a decent amount of major league playing time. What's a fan base to think after the front office threw away all that major league talent in return for minor league lottery tickets in large quantities?

Well, I wanted to take a look at all of the trades as a whole and give some perspective on the situation, in the hopes that it may allay some Pirates fans' negative reaction. It may be a tough pill to swallow for fans of a team, but this sort of large-scale fire sale may prove to be of value to the team in the years to come.

Let's start with some of the players that made their way out of Pittsburgh.

The Pirates were down ten players thanks to these trades. Of these ten, five of them were started on Opening Day and were starting for Pittsburgh when they were dealt, while another player, pitcher Ian Snell, was their Opening Day starting pitcher but was later demoted due to poor play. Let's start with four of those players, the guys I thought were the most important players that the Pirates traded away.

A lot has been said about Nate McLouth and his contributions; I refer you to Dave Cameron on this FanGraphs piece for more information. Using his numbers in Atlanta to date and the ZiPS rest-of-season projection found on FanGraphs and his prorated career UZR/150, we get a total in his time in Atlanta of 1.8 WAR.

Running a standard 8/4/2/1 projection on his last four seasons and using the typical linear weights and 1.15 OBP scaling modifer, I got a .355 wOBA projected for McLouth on offense. Using a similar projection on his UZR/150 (not sure if this is an appropriate regression for defense, as I'm new to this projection game), I got a value of -7.9 UZR/150 in center field. If we take that and give him 150 defensive games and 675 PA's a season, we get a value of 3.2 WAR to project for his next three seasons, provided his aging doesn't run him into a wall.

With McLouth's team-friendly contract (seen at the Braves page here at Cots Contracts), the Trade Value Calculator yields these results:

An impressive haul thanks to McLouth's team-friendly extension from this past offseason. The Pirates are losing plenty of surplus value there.

There was a whole lot of debate about whether Nyjer Morgan's value based on this season's amazing defensive exploits was accurate and projectable. One such long-winded debate could be seen here at FanGraphs. With so much of his value tied to his defense and such small sample sizes in Morgan's career so far, it's difficult to do much of a projection analysis without some heavier regression. Giving him a 10% chance to remain at his 28.2 UZR/150 level, a 20% chance for him to return to a +15 level, 20% chance of him being a +10 outfielder, and a 50% chance of him becoming a +5 fielder, we can peg him as a +10.4 outfielder.

As for his offense, his sample sizes here are small as well. ZiPS has a current projection of .331 wOBA for the full season, thanks in part to his offensive tear since he arrived in Washington. Since his current season is the most heavily weighted and most represented in a standard projection model, Morgan projects with a .331 wOBA for enxt season as well. Most people, however, wouldn't profile him as a league average hitter, pointing to a variety of factors including his high BABIP and age. Given that, let's fit him with an approximate regression.

With such a regression, we project a .314 wOBA for Morgan, which I think is a fair but hefty regression. For the season, ZiPS has a .309 wOBA the rest of the way for Morgan, which combined with my defensive regression yields 2.6 WAR for his time in Washington. Given our rough regressed projection and some fudging to take into account his advancing age, you get this as his expected value. 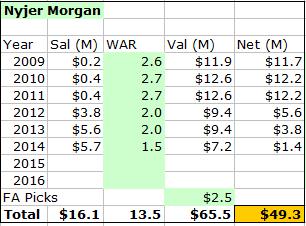 Assuming Morgan's defensive prowess can remain the same, Morgan averages out as almost a 3 WAR player. Even after fudging him down to an average player in two years, he's still well exceeded the value of his rookie contract and arbitration years. I can't claim a whole lot of accurate projection science for Morgan's projection, but I can say that Lastings Milledge better pan out into something fierce for the Pirates to take advantage of this swap.

Jack Wilson was a big fan favorite in Pittsburgh, and for the most part he's been around a league average player for much of his career thanks to his above average defense. In the last few seasons it seems he's improved offensively to something along the line of a .300 wOBA player, which goes to show how poor an offensive player he was in his formative years. ZiPS shows a pretty fair .296 wOBA the rest of the season, which I'm estimating at something like 160 PA and 40 defensive games.

Since Wilson has accumulated over 1100 games and 9700 innings at shortstop, I think it's fair to use his career UZR/150 of 5.5 as a solid expectation for his future production. Prorating that over his remaining 40 games and adding on the necessary adjustments for position and replacement and you get Wilson's worth as 0.4 WAR for the remainder of the season had he stayed with the Pirates.

Since Seattle lacks any shortstops in its farm system ready to replace Wilson, we can assume that Wilson's $8.4M club option would have been picked up. However, since we're looking at the value Pittsburgh would have received had they kept Wilson, it would be more appropriate to view Wilson's option from Pittsburgh's perspective. Based on Huntington's apparently weak contract offer to Wilson this season prior to him being traded, it seems the Pirates front office was not interested in picking up Wilson's option. Since Wilson doesn't profile as a Type A or B free agent, the Pirates' would not have received any compensation for Wilson walking. Given that, let's look at his value had he stayed with the Pirates the rest of the year. 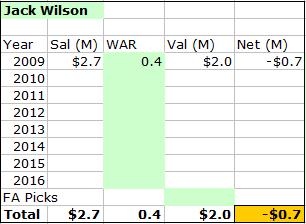 Take into account the $0.6M buyout the Pirates would have to pay to get out of Wilson's club option, and the negative value for Wilson the rest of the way would have been $1.3M. Remember that this accounts for Wilson's time in the National League. Had we accounted this value for the American League, we would have seen a value closer to 0.3 WAR, which would have cost another half a million. Seattle gave up a lot for Wilson and Ian Snell, it will be interesting to see how the following season plays out for Wilson and the Mariners.

Freddy Sanchez was Pittsburgh's representative to the All-Star game this season, but was doomed like Wilson to be traded away once he rejected the low-ball offer Huntington threw his way in terms of a contract extension. There was much to do about who Sanchez was traded for, and a lively discussion of this can be seen here, again at FanGraphs. We'll look at whether the Tim Alderson haul was worth the trade, but for now let's see how Sanchez would have done over the course of his contract.

ZiPS has Sanchez projected at .330 wOBA the rest of the way. Given a decent run of health with his knee, which had been an issue before, his likely desire to get his $8M club option guaranteed, and the Giants' continued presence in the playoff chase, it's a pretty good bet Sanchez will get the 200 PA he needs to get to 600 PA for the season. Give him 200 PA the rest of the way, accomplished in 43 games.

For defense, Sanchez is a mixed bag. In just over 3800 innings, Sanchez has a UZR/150 of 4.6, solidly above average at the position. However, according to Total Zone, not counting this season's performance, he's averaged -3.8 runs per 1200 innings. Let's weight his UZR/150 a bit heavier (55/45) and take a middle ground. Doing this gives 0.7 runs/150 games, which I will use as his defensive rate.

I ran my own guesswork regression on Freddy Sanchez for another piece for another blog, but for this projection I simply ran the same system I did for McLouth and Wilson, yielding a .323 wOBA for the following season. Assuming he either guarantees his option or the Giants choose to pick it up, both of which I believe are likely, and using his defensive value, positional and replacement adjustments at for his four-year average plate appearance total of 624 and 145 defensive games, you get the following projected value for Sanchez's remainder of season and following year. 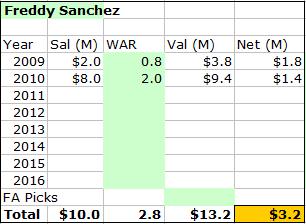 Sanchez would have been worth something to the Pirates even with his regressed defensive statistics and middling offensive performance, provided he was durable enough to stick around and be a league average player. The $5M a year offer the Pirates front office threw his way really did low-ball his value.

The current tally of just these four players? I'm glad you asked. 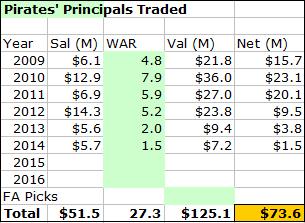 (Self-Editing Note: I messed up the McLouth contract total for his time in Atlanta. It should have included an additional $0.6M for the approximate second third of the season during which the Braves have McLouth. This is adjusted for in the summary table.)

Primarily from Morgan and McLouth's friendly contracts, the Pirates dealt a lot of value in these four players. That's 27 wins over the course of four seasons and varying parts of a fifth year. However, looking at the players they received in just these trades, it seems likely they could recoup their losses that they suffered primarily through trading Morgan. In our next installment, we'll take a look at the remaining six guys the Pirates traded away and try to come up with a total value that they shipped off in trades this season.