Chance of a Football Team Winning Knowing the Vegas Spread

Share All sharing options for: Chance of a Football Team Winning Knowing the Vegas Spread

Update - I have added curves using binary logistic regression fit as Joelestra describes in the comments.  Thanks to Joelestra for the curves.

I know that this website specializes in baseball topics, but this year I plan on doing a few number based football articles.  I hope I don't throw everyone, especially Sky, into too much of a frenzy.

With football around the corner and only trophy the Royals are contending for is Bryce Harper, which they will screw up, I will turn to a little football. Vegas is always looking at how much a team wins by, but as a football fan I always wanted to know the chances of a team winning knowing the spread. I was able to find the NFL spreads and results from 2004 to 2008 and college spreads and results from 2005 to 2008. I calculated the separate win loss records for for college and NFL.

I weighted the winning percentage chance of winning at each value to 50% for that specific line, 16% for each ½ point away and 9% for each 1 point away. this adjustment helped even the impact a huge upset, such as Stanford's 24-23 upset of USC when they were a 39.5 point underdog.   Also more spreads are at even numbers, vice ½ increments, so this help to smooth the winning percentages from one value to the next.

I have created a chart of where the winning % chance breaks are for various spreads and a graph that plots out the weighted values versus chance of winning. There is an equation on each graph for estimating the chance of winning knowing the spread for easy calculations.

NFL - % Chance of Winning vs. Spread 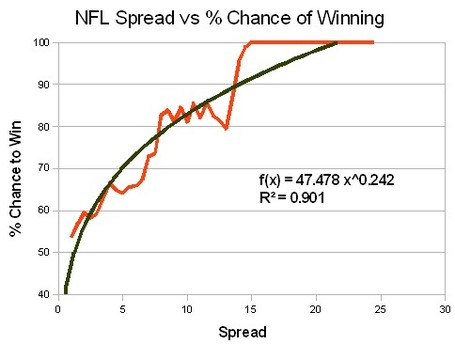 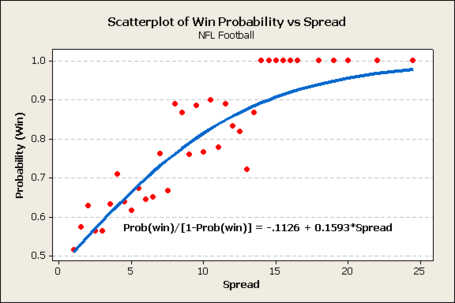 College - % Chance of Winning vs Spread 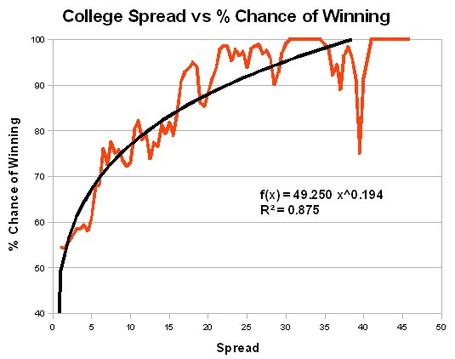 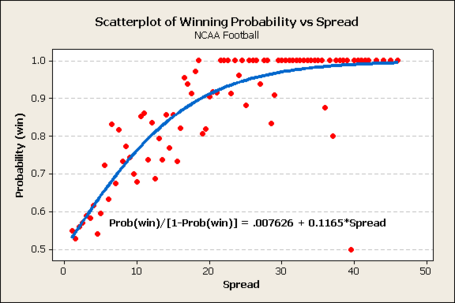 So now you know when your college alma mater is a 14 point under dog, the team has about a 20% chance to win and knowing is half the battle.