Share All sharing options for: Book Review - "Satchel - The Life and Times of an American Legend" by Larry Tye (Including an Interview with the Author) 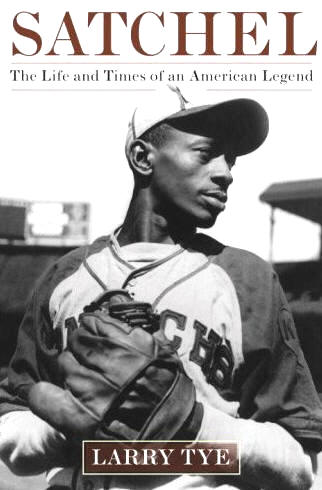 Random House has been kind enough to provide a free copy of Satchel to one BtB reader. All you have to do is make a comment on your favorite Negro League player. In a week, I will randomly choose a name and Random House will send that reader a free copy of the book

I've received several requests to review books since going BtB. Between my own writing and two toddlers to contain, I barely have time to sleep, yet alone read a book. When I was contacted to do a review of "Satchel", I jumped at the opportunity, though. I've always been interested in the Negro Leagues, mainly because Kansas City has embraced  their history, given the Negro League Baseball Museum in Kansas City and the Monarch's Pennant and Championship flag flying at Kaufman Stadium, and I was happy to do a review of the book.

The book was outstanding and I would recommend it to anyone interested in Satchel Paige, Negro League history or what baseball was like when it was being integrated in the middle part of the last century. I don't want to just rehash what is in the book so I have decided to highlight some areas I found interesting and include an interview wtih the book's author, Larry Tye.

The most interesting story I enjoyed was when Satchel about had to give up baseball 20 years earlier than he did.  In 1939, he lost his ability to throw with any speed due to an unknown injury, which was possibly a torn rotator cuff.  Frank "Jewbaby" Floyd, the Monarchs trainer, helped him regain his velocity by soaking his arm in cold and then hot water. Then Frank alternated cold and hot wraps and applied an ointment called "Yellow Juice".  Finally, he limited Satchel to just a few innings of pitching. All of the preceding measures are remedies used today for rotator cuff tears, except that "Yellow Juice".  I have been looking for a video of Satchel throwing before the injury for Kyle Brodie of Driveline Mechanics for him to examine to determine the possible injury, but I not had any luck in finding the video.

There were several other stories from the book which were pretty memorable.  One story was when Satchel began calling Buck O'Neil the name Nancy after Buck helped Satchel hide one of his girlfriends from his wife.  Another is the circumstances around Jackie Robinson being the first black player in the majors. It seemed like Stachel was going to be the first player several times and when it was Jackie, Satchel and several other players were bitter.  A sad one involved when Satchel could no longer play ball.  He still had to make a living and did it by being the guest speaker at events. From these events, he would take back home as much food and stuff as he could carry.  Once had a bag break and his half eaten meal from room service the night before fell out.

Besides these facts and stories on Satchel, the book had some great facts on black baseball and here are a few facts that I never knew.

A couple of facts from the book peaked my personal interest. In 1950, Satchel joined a group of black all stars that called themselves the Kansas City Royals. I am going to try to find out if this is where the current Kansas City Royals got their name or if it was just a coincidence.   In 1960, Satchel threw for the Salina Kansas Bluejays. My wife is from Salina and we were married there. I can't find any information on the web about his stint with the Salina team, but when I head back home, I will be sure to check it out.

I did find one aspect of the book a little annoying and is that it was written as if the reader had little knowledge of baseball.  Here are 3 examples of the book defining terms that many baseball fans would already know

These should not keep you from reading the book, but they were just a little annoying to me.

After finishing the book, I contacted Larry Tye and he gladly answered the following questions for me on the experience:

How's life been after publishing the book? Looks like you have had a pretty busy schedule.

Life since the release of Satchel has been even more fun than life while I was reporting and writing it. Imagine having your publisher send you around the country, doing talks to people who love baseball, love the Negro Leagues and love Satchel Paige. Imagine dozens of ballclubs inviting in you in to talk to thousands of fans, with some team owners giving away copies of your books and others selling them.

It has been busy, and been a blast.

Have you found/obtained any new information on Satchel since the book was published?

Yes, I have heard fun stories I hadn't heard before from Satchel's fans, his teammates and foes, and his daughters. All had been helpful before, but everywhere I go I hear new tales of his mythical accomplishments from people who swear they were there, and of his touching sensitivity as a dad.

What part of researching the book what the most difficult?

Coming up with numbers from the Negro Leagues isn't easy. Reporters from black papers covered games sporadically, and from white papers rarely. The league couldn't afford to keep statistics. Scholars have dug up some numbers, but not complete or consistent ones. I pieced all that together for Satchel and, more important, talked to more than 200 old Negro Leaguers and Major Leaguers who played with or against him.

You can judge from my book whether I offer a complete enough portrait.

What part of researching the book did you enjoy the most?

The interviews with old ballplayers.

What part of researching the book did you enjoy the least?

The footnotes and bibliography. I felt these were essential, given how few books on black baseball include them and how important it is to offer this guidepost to future researchers. But putting all that together is time-consuming and not fun.

Looking back, is there anything you left out that you wished you would not have?

No. I did leave out a lot, but feel that most readers, no matter how passionate they are about a topic, don't want a book that is longer than 300 pages. So it is an author's responsibility to include only her/his best material.

Looking back, is there anything you printed that you wished you would not have?

Nothing that I can think of.

Any future projects we can expect from you?

Yes, I am working on a biography of Superman for Random House. It was partly an outgrowth of Satchel, and my interest in how America embraces the heroes it does. There was no longer-lasting hero over the last 100 years than the Man of Steel.

Is there any other statement or information you have to say?

I think that is more than anyone wants to hear from me. If they want more, they should have a look at my website and blog at www.larrytye.com.

I definitely recommend this book to anyone interested in the subject matter. Larry did a great job of putting together Satchel's life, from being born in Mobile Alabama to his death in Kansas City.  If you read the book, I hope you enjoy it as much as I did.