Share All sharing options for: New Arms of the Week - August 17-23

I am giving Harry a week off and doing the new arms this week.  Ricky Vaughn of the Cleveland Indians is the only new arm this week. 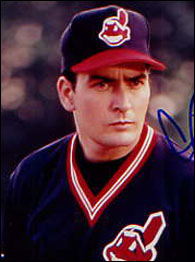 Ricky made his debut in the sixth inning against the Yankees this last week. Here are his pitch f/x numbers:

His fastball, the only pitch he threw, had first rate speed, but he could not control it at all. Vaughn walked the bases load on 12 staight pitches and then severed one down the middle to Haywood who jumped all over it for a hit a home run. Vaughn hit the next batter he faced and the umpire immediately threw him out of the game. With his velocity, Vaughn will be getting a few more chances in the majors, but if continues to throw like his first outing, he might end up killing someone.