After a long weekend, the Daily Box Score is back with plenty of news. Yesterday's Rule 4 draft signing deadline came right down the to the wire. Of course, as is usually the case, most players signed (with a few exceptions). You've likely already heard about Stephen Strasburg's record contract, but there was other news yesterday, as well.

Strasburg
Why the Deals Got Done
Major League Contracts
No Pressure, Though
Discussion Question of the Day

Just after midnight last night, the news broke that Stephen Strasburg had agreed to a four-year, $15.1 million contract with the Washington Natinals Nationals (in honor of getting this done, I propose we let them have their "o" back). As reported by the Associated Press:

The struggling team and the hard-throwing right-hander resolved everything at "11:58 and 43 seconds," Nationals president Stan Kasten said.

"People thought it would take to the last minute," Kasten said, smiling. "We didn't even need that last minute."

That's an awful lot of money. To put it in perspective, if he invested the paychecks as he got them and simply lived off the interest (without touching the principal), he could take in over $200,000 per year. And that would be true if he never pitched an inning in his life. So I think it's safe to say it was a good deal for Strasburg. But was it a good deal for the Nationals? Jeff Passan isn't so sure:

So how, then, can he be like Griffey? Perform to expectations, no matter how high and unfair, and do so with the grace and class so few possess. Accomplish that, and $15.1 million will look like a bargain. Strasburg’s starts will become events. Washingtonians will see it’s worth traveling to the southeast for games. Tickets will sell, jerseys as well. No. 1 pitchers are hard to find and bank-breaking when found, and Washington will have its for a while.

Fair enough, I suppose, already to be comparing him to Hall of Famers. What say you, Robothal?

That is a win for Stephen Strasburg and his advisor, Scott Boras, even though the number is way short of what Boras contended the pitcher might be worth as a free agent.

But you know what?

Strasburg's four-year, $15.1 million contract is an even bigger win for the Nationals — the biggest of their season and maybe their entire sorry history.

The deal could be a huge win for baseball, too — if the players and owners finally come to their senses and agree to fix the way that the game distributes amateur talent.

I see you decided to one-up Passan and burden Strasburg with fixing an unfixable system. Bravo! Everybody wins!

In fairness to Nationals fans (I know you're out there!), this was a nerve-wracking time. What if he didn't sign? What if they had to wear this jersey? Sometimes, trust is a difficult thing. Congratulations, Nats fans, you got your man.

Why the Deals Got Done

Conventional wisdom seemed to go in two directions. On the one hand, both parties had too much at stake not to sign. On the other hand, Scott Boras is a fire-breathing dragon and the Nationals are pathetic and wussy. I'm certainly sympathetic to both of these arguments. But there must be some way to authoritatively, definitively, and with the use of a graph to explain the logic of not just Strasburg's deal, but the deals of nearly all the first rounders. That's why I'm thankful for Sky Andrecheck and game theory:

Graphing the intersection of these two (admittedly hypothetical) value curves, we see that the both sides should have been willing to do a deal valued anywhere between $11-$35 million. While the lines intersect where each side gets an equal gain from the deal at about $23 million, any deal struck within that range should have be acceptable.

He goes on to explain why it took until the deadline to get a deal done that ought to have been so obvious. He also provides this graph, which I have edited slightly (click to enlarge): 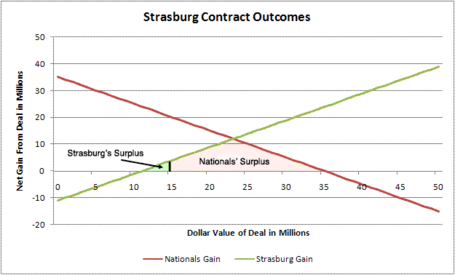 The Nationals are aware that their negotiations with Strasburg will affect how other players negotiate with them in the future. If the Nats broke down and gave Strasburg a $30 million deal, this might be worthwhile in the short-term, but they would also raise the expectations for every other high profile player they picked in the future (including a likely Bryce Harper selection next year, which will almost assuredly entail the same type of negotiations as this year's drama with Strasburg). When this is factored in, the true break-even point for the Nationals is lowered considerably.

Strasburg, on the other hand does not have this same kind of recurring scenario. At most, Strasburg will be back at the bargaining table with the Nats one or two more times, and those will be under completely different pretenses since he will by then be eligible for either arbitration or free agency. As a result, Strasburg's break-even point isn't changed much by the possibility of future deals [...]

This strikes me as exactly correct. If you read one article on the Strasburg signing, I recommend you make it Sky's.

If you're reading Beyond the Box Score, there are exactly two possibilities. One is that you perfectly understand the inner workings of the contracts given to players like Stephen Strasburg and Dustin Ackley (the #2 overall pick by the Mariners), and are just beginning to realize how little other people understand about them. The other is that you are completely baffled about the entire process. If you're in the second camp, Dave Cameron is here to help:

A major league deal is a positive for Ackley because it gives the M’s a real incentive to get him to the big leagues in rapid order. Getting a major league deal right out of school pushes the cost/benefit needle for the team towards being aggressive in promoting him, whereas the needle goes conservative with a player who doesn’t already have predetermined salaries for future years.

The key difference between a major league deal and minor league deal is that in the former case a player is immediately put onto the 40-man roster. He thus takes up a spot, which means the team is more likely to accelerate his schedule. There are other useful bits of clarification (such as those having to do with service time) at the link.

If you're a first round pick and you signed with your team, you've no doubt already accrued the pejorative label "bonus baby." And kids, I've got bad news for you. There's only one way to beat the rap: perform up to expectations. Take this Albert Pujols guy. He was a 13th round pick (402nd overall). And he's doing pretty well. All you gotta do is be better than him.

How good is he? Well, he might be the first player since 1967 to win baseball's triple crown. He needs to pass Hanley Ramirez in batting average. He currently trails .356 to .329--a seemingly wide gulf with under 50 games left to play. But what are the odds he can pull it out? David Pinto crunches the numbers:

Summing all the individual probabilities results in an overall probablility of .3259 for Albert finishing ahead of Ramirez in the batting race. That doesn’t mean he wins the batting title. Pablo Sandoval is still in the mix, and Bruan and Helton are more than capable of putting on a push of their own. One in three aren’t bad odds, however.

You can check his methodology at the link. One assumption that may not be great is that he uses their career batting averages as the probabilities that they will get hits. Pujols' career AVG is .334, while HanRam's is .317. However, their rest-of-season ZiPS projections have them at .329 for Pujols and .323 for Ramirez, which would make it much less likely that Pujols could pass Ramirez.

Let's play a guessing game. How many career strikeouts will Stephen Strasburg have in the major leagues? Of course, WAGs are welcome, but if you can show your work a few extra middle school math teachers will get their wings.