Share All sharing options for: UZR's (and Most Other Defensive Metrics) Limitation in Year to Year Analysis

A very familiar measure of this overall contribution is Wins Above Average (WAR) which is track by Fangraphs. The defensive metric that Fangraphs uses in its WAR calculations is UZR (Ultimate Zone Rating).  The measure is considered one, if not the best defensive measure available today.

Example 2. In 2005, the formulas that are used to calculate UZR loved the effort Orlando Cabrera displayed, especially with the Range Factor component of the UZR values. The following chart is Orlando's Range Value and Total UZR for 2004 to 2006. 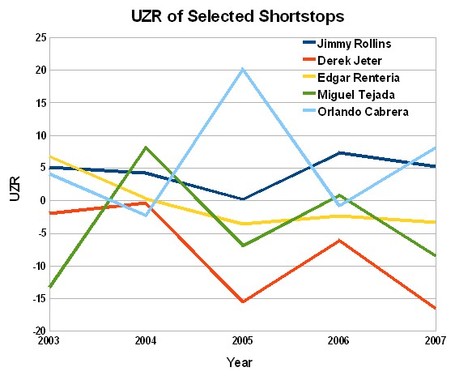 As it can be seen in 2006 when Cabrera's numbers lowered, everyone else's UZR values adjusted up close to about what they previously were at.

Besides the two previous examples of a player getting hurt or a player playing significantly better, here is a list of other possible causes:

I hoped to increase the understanding of the limitations of using UZR (and other defensive metrics) when comparing year to year values. As always your comments and suggestions are welcome.