Share All sharing options for: Number of Saves vs. Games Over .500

Tommy Bennett is helping me with a 2010 baseball draft and we got into a discussion on closers. We are allowed only one reliever in a normal 5x5 league, so this reliever will need to get the as many saves as possible. I said that we need to get a reliever from a team with many chances (e.g. Rivera, Papelbon) while he stated that the team's winning percentage doesn't matter. He tried to Google and couldn't find any articles on it. I decided to go ahead and do a quick look into theory.

I took the games over 500 and the team saves for all teams between 1999 and 2008. Then I plotted the data and generated a regression line along with the r-squared value and here are the results: 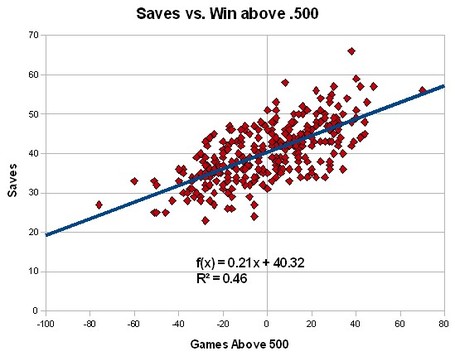 This analysis shows that with a r-squared of .46, about 46% of a teams' closers ability to get saves depends on the number of games the team is above .500. Also, I went ahead and figured the standard deviation from the predicted and actual value and ended up with a value of 6.26 saves. Here is a chart of predicted number of saves a team should have depending on their record:

Using this data, you can see that a closer on a 100 win team has an over 95% chance of having more saves than the average closers on a 62-100 team.  There are definite other factors involved in the number of save chances, but if a team doesn't win, there can't be a chance for a save. Hopefully, I am able to convince him now and next the two of us need to decided when we are going to actually draft our closer.