As you may have heard in many other places, the Milwaukee Brewers recently performed a roster shakeup by firing longtime pitching coach and former Brewer Bill Castro, designating Bill Hall for assignment, and perhaps the most controversial move of all, optioning J.J. Hardy to Triple-A Nashville and bringing top prospect Alcides Escobar to the majors for an extended look.

While the timing was certainly strange (more on that later), it wasn't as if Hardy was making his case to remain in the majors, at least at the plate. On the year, Hardy had only a .229/.300/.367 line, good for a meager .294 wOBA according to FanGraphs. So did the Brewers make the right call personnel-wise to bring up Escobar and send down Hardy?

The Case for Hardy

Slash lines lie sometimes. Well, they don't lie in the sense that they represent what he's done so far this season, but they do not tell the whole story about Hardy's play.

The first thing that pops out on Hardy's FanGraphs page is that his BABIP is extremely low, sitting at .258. That value is good for fifth worse among qualifying players in baseball. Of course, his equally ridiculously low line drive rate may have something to do with this; among qualifying major leaguers, Hardy's LD% of 13.3% is the lowest in baseball.

However, Hardy has been league average in the many of the underlying offensive statistics. 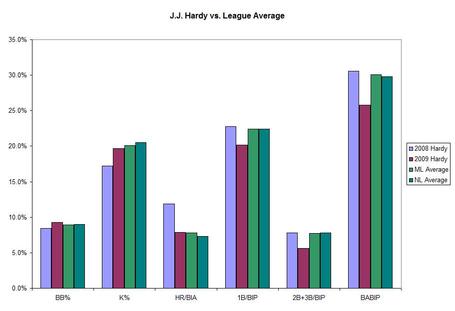 The graph above has both 2008 and 2009 Hardy, comparing this season's values to a year where Hardy had similarly poor line drive rates (15.5% in 2008, 13.3% this season). This season's version of Hardy has been league average in terms of walks and strikeouts. Hardy has bumped his walk rate up to 9.3%, while his strikeout rate has risen to 19.7%. According to Baseball-Reference, the National League's averages for walk and strikeout rate are 9.0% and 20.5% respectively. These numbers match up even better when considering the major leagues as a whole. Hardy's home run rates have dropped from his 2008 season, but counting both line drives and flyballs, his rate is exactly major league average.

You can see in the graph that the major difference between your league average player and Hardy this year have been his singles and doubles+triples rates. As Pizza Cutter has shown in his article on the reliability of hitting statistics as season predictors, those rates take some time to become meaningful representations of players. From Pizza Cutter's research, singles rate becomes meaningful only after 500 PA, while 2B+3B rate doesn't become significantly meaningful over the course of an entire season's worth of PA. In other words, much of Hardy's poor production has been based on numbers that are very volatile for much of the season. Ironically, 2008 Hardy was very league average in these respects.

As an exercise in what might have been, I calcualted Hardy's slash line and wOBA replacing his singles/BIP with the league average value. This yielded an additional six singles, which hardly seems significant; we often times hear about defender robbing base hits all the time, and it's perfectly reasonable that of all the balls in play that Hardy has it, six of them could have been robbed by good defensive play or just luck. In any case, here are the results:

The additional singles brought his BABIP to .278, in line with his ZiPS rest-of-season projection. The difference isn't large qualitatively, and it's still admittedly a terrible offensive season, but just six extra singles yielded a .013 difference in wOBA, good for almost a half-win difference on offense.

Of course, this doesn't take into account Hardy's excellent defense. So far this season, Hardy has been worth 8.7 runs above average by UZR, and was on pace for a UZR/150 10.4 until his major league season was cut short. Currently FanGraphs has him as a 1.6 WAR player through 114 team games. Those extra six singles would make him a 2 WAR player, around average for a shortstop and a good deal above that given his positional adjustment.

Would Escobar fair any better?

So the Brewers gave up on a player that could be easily be worth 2 WAR so far this season. Would Alcides Escobar be able to match up to J.J. Hardy? FIrst off, knowing nothing numerically of Escobar's defense, but knowing his reputation is that of a glove-first shortstop, let's assume both Escobar and Hardy are even on defense.

According to BP's Davenport Translations for minor league players, Escobar's Triple-A performance would have translated to a .276/.324/.405 slash line and an equivalent wOBA of .320, not including any stolen base data (it comes out to .325 if you calculate it like FanGraphs). At the number of PA's that Hardy played, that would be a difference of 9.8 runs, or about a win on offense.

However, Clay himself states that players often underperform these translations due to various factors. No actual factors were mentioned, but if Escobar underperforms this projection by just 5% across the board, his wOBA becomes .304, underneath our imaginary but not unbelievable Hardy + 6 singles player but still a good 3.6 runs better than the real 2009 Hardy. Let's take the middle ground on the full translation and a 5% reduction in performance. At a 2.5% reduction in performance, you get a wOBA of .313. Without doing any regression and giving about 3.8 PA per game to Escobar for the remainder of the season (assuming he continues to bat ninth in the lineup behind the pitcher as he did on Thursday evening), and you get an additional offensive value of 2.3 runs the rest of the year. Using Escobar at his projected wOBA value of .325 with stolen bases gives you 3.7 additonal runs over Hardy. Fairly insignificant, but of course, there were other reasons that could have factored in to replacing Hardy with Escobar.

Escobar was the future at shortstop for the Brewers. Hardy's lackluster offensive performance this season made this fact even more evident. With Hardy again headed for arbitration next year. the team would have to either pay Hardy a significant raise and shift infielders around to fit Escobar into the lineup, or trade Hardy and move their young prospect into shortstop.

But it seems as if the timing of the demotion has allowed for some manipulation of Hardy's service time. As Dave Cameron goes over here on FanGraphs, moving Hardy down to Triple-A for three weeks actually keeps him just short of qualifying for five years of major league service, meaning that it delays his free agency an additional season. Cameron points out that this naturally would increase Hardy's trade value as well.

I won't belabor the service time point, as Dave and many others already have, but as we can see, even in the most optimistic of situations given the numbers we've seen from both players so far, this move adds very little to the Brewers offense this season. With their playoff hopes fading, it is understandable that they would want to see Escobar play, but with September call-ups coming soon, it brings even more question as to why the Brewers decided to pull the trigger now instead of then, especially since Hardy has played decently even with his problematic bat.