On Monday, Vladimir Guerrero of the Anaheim Angels of Los Angeles hit his 400th home run and thereby joined an exclusive group of players that hit the 400 home runs and also hit for a .320 batting average or better. The other five people in the group are Babe Ruth, Stan Musial, Ted Williams, Lou Gehrig and Jimmie Foxx. Not bad company. Here is how all six rank all time in Win Shares and WAR compared to other hitters.

Obviously Vlad ranks significantly lower than the other 5 players and might be tough for him to make up to much ground. The following is chart you might have seen a couple times yesterday since it was already published in some form here at Beyond the Box Score and at The Book Blog. I was going to run this story yesterday and I wake up and there are already 3 articles published (Hard Ball Times, The Book Blog, and Beyond the Box Score) on how to create correct WAR graphs. There has also been one since then at the Hard Ball Times. Through the discussions there have been some improvements made and a possible new look I will call the Sky-Tango look since both have wanted the version for a while. Also there are a couple of definitions to help with explaining the charts and a poll at the end to let us know which version you like the best.

Graphs after the jump 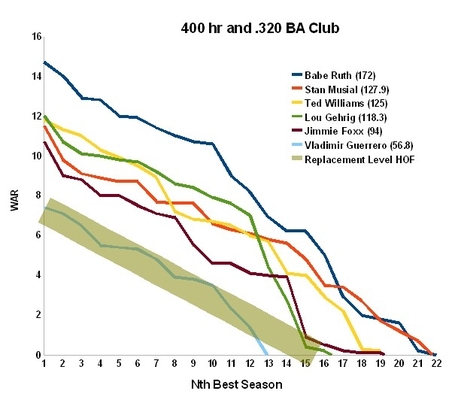 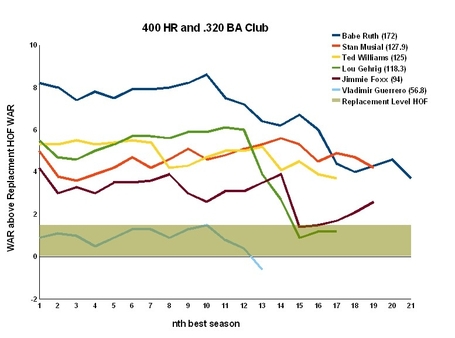 Hall of Fame Grey Area – This is the area where a player's career may or may not justify them getting into the Hall of Fame. I did some previous work for what values to use for the average and replacement level lines for data after 1954. Tom Tango figured out using Rally's complete WAR database good values for Average (starting at 8 WAR and drop by .5 for each year) and Replacement Level Hall of Famers (starting at 6.5 and dropping by .5 each year). A grey area is created on the graph to show this unsure region,

Now for those using a spreadsheet and wantint to create the grey area, start the line at 7.25, decrease each additional value by .5 for each year. Then make the line grey, transparent and wide enough to cover the values of the average and replacement level Hall of Famers.