Analysis of a Fire Sale: The Pittsburgh Pirates, Pt. 2

Share All sharing options for: Analysis of a Fire Sale: The Pittsburgh Pirates, Pt. 2

In Part 1 of this series, I looked at the players that the Pittsburgh Pirates traded that I believed would provide the most value for their respective new teams. Using ZiPS rest-of-season projections and some projecting and estimation of expected value, I came up with WAR values for the remainder of their team-controlled years and calculated the surplus value you would estimate using Sky's Trade Value Calculator.

In today's piece, I'll be looking at the rest of the castaways from Pittsburgh, which include a cast of free-agent-to-be's and two interesting starting pitchers who had worn out their welcome in Pittsburgh.

Departures: The Rest of the Bunch

The rest of the players invovled in trades away from Pittsburgh included six players, three of which appeared not to be a part of the long-term plan of the Pirates organization. The other three players included an effective relief pitcher and two former Pirates starters that the organization was losing interest in.

Adam LaRoche was acquired in 2006 from Atlanta for Mike Gonzalez in a somewhat straight-up one-for-one deal. I'd say it was a good trade for the Pirates in terms of production; while Gonzalez has come up with a grand total of 1.5 WAR (via FanGraphs) over the course of two and a half injury-riddled seasons for the Braves, LLaRoche has garnered up 4.5 WAR over around that same period of time. The problem for the Pirates? LaRoche's contract has inflated for the type of value he provides. He is a decently above average hitter (career wOBA of .350) but a somewhat below average defender at first base, the position at which you can least afford to be a poor defender. Thanks to the positional adjustment for first basemen, LaRoche was only marginally producing more than he would have commanded in the free market, and his arbitration value had shot into the $7.05M range for this season, his worst so far with the Pirates. As a result, the Pirates dumped for a middling minor leaguer to the Boston Red Sox, who later decided to move him back into the National League to his old team in Atlanta.

LaRoche figured to earn about $3M the rest of the season for the Pirates. Taking into account his production for the Red Sox and now the Braves after the trade and his ZiPS rest of season projection, we can expect a .346 wOBA the rest of the way. In the first post's comments, devil_fingers suggested using a 5/4/3 projection system to project defense, with an addition of 100 defensive games of league average. I figured this would not be a bad call, and ran the numbers with the last four seasons, including this season weighted at the number of innings LaRoche has played this year compared to in the previous years' samples, and got a UZR/150 of -1.9. Let's jump to the trade calculator! 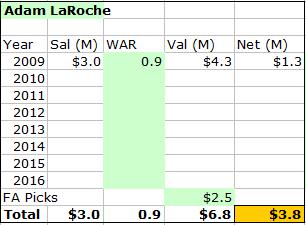 I generously gave LaRoche's production the value of a Type B free agent, though with Elias, I never can guess (nor bother too hard to try). Needless to say, with LaRoche's inflated contract and poor production relative to recent seasons, it was clearly the right move for the Pirates to dump him; at $3.8M, the Pirates could afford to pick up a lottery ticket low-level prospect and still be OK, and that includes the potential that LaRoche will get Type B status.

Eric Hinske signed a one-year deal with the Pirates to be a backup at the four different corner positions. Needless to say, he wasn't playing much, getting spot duty mostly as a pinch hitter and occasionally in the field on defense.

Hinske managed a .339 wOBA that was right on par with his career total of .338, but he's done so in limited appearances. ZiPS has him projected at a .345 wOBA the rest of the way, encompassing some 88 PA. Because Hinske so sparingly plays in the field, any attempts to come up with a defensive value for him may be a result of mostly noise given how much he'll be playing. Let's call him defensively even across the positions he might play the rest of the year. Adding up the offensive and defensive contributions, you get this from the calculator. 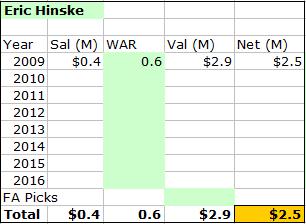 Hinske is a decent hitter off the bench and probably could have earned some time if he hit as hot as he did at the start of his limited Yankee career. Still, the Pirates should not miss him and it was the right call to get anything out of Hinske, and the Pirates did indeed acquire two low-level players in the deal.

Looking over Grabow's value on FanGraphs, you can see that while he has racked up a lot of innings for a reliever (367 innings in just around 7 1/2 seasons in the majors), he hasn't done much with the time, racking up 1.1 WAR over the course of his career. To make things easier on me, let's say Grabow is about replacement level for the rest of the season. 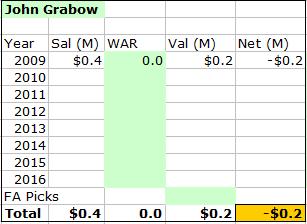 That may not have merited my effort in building a chart. Obviously, replacement level talent should come on the cheap, and the Pirates were paying real money to a reliever who wasn't deserving of it. Grabow was packaged as part of a deal that sent the next player to the Chicago Cubs for some worthwhile warm bodies.

Burnett is a former first-round pick for the Pirates who is among many of such players to have been considered busts. After a 13-start stint in the majors in 2005, Burnett did not see major league action until 2008, when he pitched 58 games in relief for the Pirates. He was traded along with Nyjer Morgan in the Lastings Milledge deal.

Burnett hasn't done much in his short career in the majors. He's been around replacement level for his 105 innings in the big leagues, and he happens to be approaching 27 years of age. For sake of argument, call him replacement level and under team control until his rookie contract status ends next year.

Here's where the analysis gets a little tougher. Snell was the Pirates' Opening Day starter, but after 15 starts was optioned down to Triple-A, where he dominated in six starts against inferior competition.

Snell's valuation is tricky, due to fact that it appeared as if he would remain in the minors for some time further until perhaps being promoted back to the majors in September. In addition, he isn't a prospect, so using Victor Wang's research as listed in this article by Sky would not be plausible. Here's my approach, to avoid any serious difficulties: I will have Snell producing 0 WAR over the remainder of the season, followed by projecting his season to 160 innings for the next season. This approach does not seem terribly inaccurate, as the Pirates currently have a weak starting rotation and have Snell under contract for another season at a not-so-discount rate. This also assume the team will not pick up its club options on Snell once the contract ends, a good bet at this point given how poorly he has pitched.

With an 8/4/2/1 projection, a rough regression to the mean, and a four-year average of the NL's runs scored per game, you get this value from the calculator. 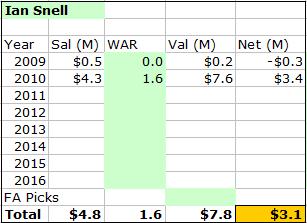 I was fairly surprised to see Snell worth 1.6 WAR over the course of a season giving up around five runs per nine innings. But starters get a lot of credit for being able to pitch a lot of innings, and we know that replacement level starters give up a good deal more than five runs per game, so Snell was not a bad value. If he continued to play this way for the team's club options worth $6.75M and $9.25M for 2011 and 2012 respectively, he'd likely build up a decent amount of surplus value.

Gorzelanny is an even odder case than Snell. He was able to rack up 201 innings of solid baseball in 2007 for the Pirates, but followed that season with a horrific 2008 in which he posted a 6.35 FIP and walked more batters than he struck out in 105 innings. He worked eight innings in relief this season for the Pirates before being sent down to Triple-A, where he, like Snell, dominated.

It seems extremely difficult to judge how the Pirates would have likely used Gorzelanny in the future. He was under rookie contract for another year then under arbitration control for another three seasons, but it would not have been surprising to see the Pirates bury him in Triple-A for a while. For this purpose, I'm going to give him a similar treatment as Snell, giving him no credit for this season and a projection for 130 innings (less innings because he could be in and out of the league, especially with his rookie salary) for the last rookie year. Afterwards, I'll assume the Pirates non-tender him to make life easier.

With the same sort of projection and regression, you get this value for Gorzelanny. 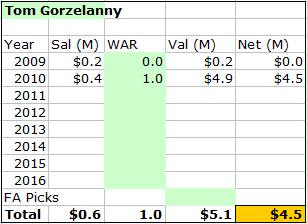 Even with Gorzelanny's value decreased, a decent regression to the mean brings him to just about 1 WAR over 130 innings. Even though both Snell and Gorzelanny were dumped into Triple-A for their supposed poor performances, the Pirates were actually trading decent value away, at least based on my analysis.

Now, we finally have all the numbers to get a representation of what we could expect from all the Pirates players dealt. Here's the final running tally. 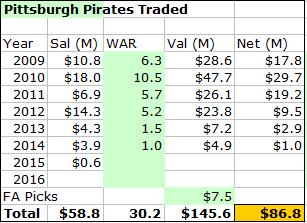 (Note: In the previous tally I forgot to include the picks from free agency. In addition, because of some weak regressing on my part and some people expecting less out of Nyjer Morgan, I fudged with numbers more at the end of his time with the Pirates. He was still worth $47M in the end)

There is an assumption that goes into this number of $86.8M in surplus value. Primararily, the assumption is that the commonly used figure of $4.5M per win is held long term. It would probably increase as we move forward, so this value could be even higher. We can't know how high those wins are going to be worth in the later years, though it would only affect the contracts of Morgan and McLouth. A minor note, McLouth's following three seasons are assumed to be at center field, where we all know he isn't very good. The Pirates have Andrew McCutchen, who would like have replaced McLouth in center and moved him to a corner. If you'd like, adjust accordingly, but based on the merit of positional adjustments, it isn't a terrible assumption to say that he's likely the same.

Because Morgan and Nate McLouth were the players with the most long-term staying power with the team, they were the ones who contributed the most to the value of the trades. Morgan was over half of the total value on his own because of his rookie contract status and the potential value of his defense. Whether it regresses as he reaches 34 years of age by the end of his time with the Pirates remains to be seen. The other players involved in the trades had no long-term future with the team, and the Pirates were simply looking to take on value in terms of service time and potential in return for their short stays.

The way I have it considered here, the Pirates traded away 22 seasons worth of service time and 30.2 WAR over six actual seasons. In Part 3, we'll discuss the Pirates bounty coming in and the enormous amount of return service time they received in prospects. Can the value returned match up?