Martinez came back against the Cubs, tossing 99 pitches, topping out just under 93 mph, which are both pretty darn good for this vintage of Martinez.

He threw change-ups, sinkers, fastballs slutter/slider/slurve thingees and a curveball.

Flight paths and more after the jump. 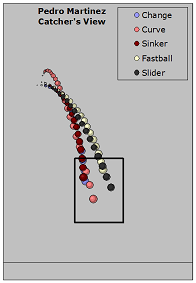 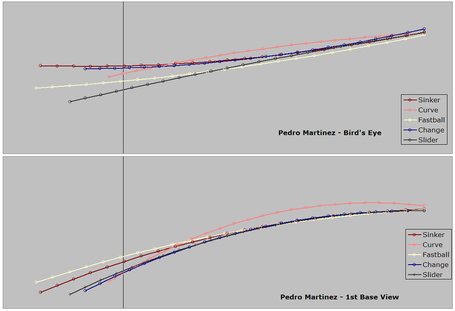 Pedro was Mr. Fly Ball, getting only 12% of balls in play on the ground. 18% were pop-ups, which is sky high. No pun intended. No one offered at a curveball, resulting in just a single called strike. Otherwise, Pedro worked the zone more than 52% with each pitch.

Martinez liked his sinker, but even that only yielded fly balls (two flies and two line drives). Pedro threw it 25 times, second only to the four-seam fastball (30), but it was the one pitch the Cubs managed to hit hard. While no one swung at the curveball, the other pitches combined for an even .300 whiff rate, ranging from .222 (sinker) to .357 (slider).

We'll see how Pedro looks next time out before passing judgement, but he got off on the right foot.