Graph of the Day: Derek Jeter and Old Yankee Stadium

Share All sharing options for: Graph of the Day: Derek Jeter and Old Yankee Stadium

Derek Jeter's HR totals the last 3 years (2009 excluded): 14, 12, 11.  So far, through 45 fewer games than 2008, Jeter already has 12 HRs.  Much has been made about the homer-increasing effect of the New Yankee Stadium.  Let's take a look at where the 10 HRs Jeter has hit at the new park map out at the House that Ruth Built.  Red dots represent balls that would not make it out at Old Yankee Stadium. 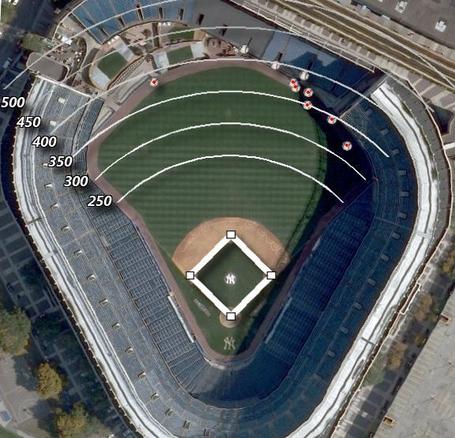 Again, there may be some errors due to scaling, but the effects seem pretty obvious.  Only three of the 10 homers Jeter has hit at the new stadium would be out without the switch.  With this boost in power, Jeter's ISO has risen 23 points from last year's mark.  Jeter may be in a park that plays to his strengths as an opposite field hitter, but Jeter's 35, and not much has changed outside of where he's playing.  Despite his increased production, it is still questionable whether or not Jeter's career can continue after he can't play SS any more.