As has been much discussed in the Sabermetric blogosphere, the Philadelphia Phillies made the questionable decision to sign Raul Ibanez to a 3 year, 31 million dollar deal while simultaneously letting a similar player in the younger Pat Burrell walk without even offering arbitration.  Raul, however,  has done his best to attempt to silence critics this year, however, putting up a fantastic .305/.371/.620 line in Philadelphia.

Still, it is well known that Citizen's Bank Park is a homer haven while Raul's old stomping grounds Safeco Field is a cavernous pitcher's park.  Because much of Safeco's damage is done to right handed hitters, it is worth a look to see if Raul's home runs this year have been impacted by his move from Philly to Safeco.  Here is Raul's home run chart (both home and away homers included) superimposed on to Citizen's Bank Park.  Some error from scaling may occur here. 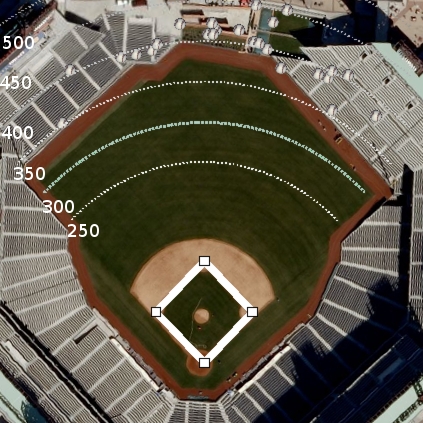 Ibanez, as a left handed hitter, naturally hits most of his home runs to right field.  Still, he has seen quite a bit of success going to the opposite field as well, specifically to right center, which is the most spacious area of Safeco.  Here is the same home run chart superimposed onto Safeco Field.  Those balls which would not be home runs at Safeco are noted by red dots. 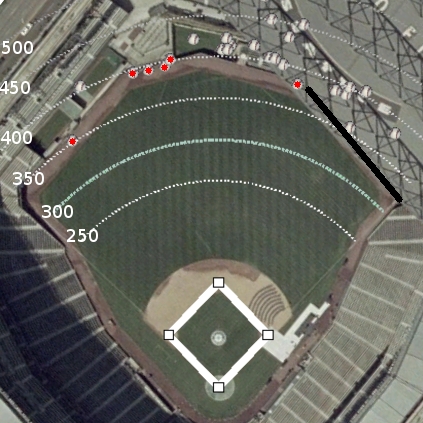 Again, there may be some errors due to scaling to fit the image.  Also, because the roof is blocking out part of the RF fence in this image, I used some other images to create an estimate of the RF fence, as represented by the black line.

Obviously, Raul's opposite field power has been greatly increased by moving to CBP.  If we were to take away these 6 HRs from Ibanez this season, and turn them into outs, Ibanez's wOBA would go from .416 to .385, a difference of 10 runs, or nearly a win.  Obviously, the impact is not quite this much; some of those hits would be home runs in away parks or may fall for doubles.  I think (subjectively) that impact is closer to 5 runs, which would put Ibanez at 3.2 wins for the season so far.  Still fantastic, but it is important to remember not all of Ibanez's increased production is real.