I wish I'd been able to think of a snappier title, but that one gets right to the heart of the matter. Less than a year after winning the MVP, Pedroia's Green-Monster-aided slugging stands at a paltry .392, more than .100 below the mark he put up during his 2008 campaign. Since I go out of my way to avoid watching Red Sox games, I have no idea why this might be the case. He's getting hits less often, yes, but a thirty point drop in batting average makes a hundred point slugging implosion not. The fun part of not knowing anything? We get to test out any hypotheses and play around with data! (I think that's fun)

For about two months at the beginning of the season, it was pretty difficult to escape a commercial featuring Dustin Pedroia defend himself from the accusation that he couldn't hit a high-inside fastball. With that springing to mind whenever I think of Mr. Pedroia, and because it'd be really funny if true, my belief as to his power-outage is two-fold:

Obviously this would imply that teams pay more attention to television than advanced scouting, but hey that'd be hilarious too, so I'm really hoping that we can confirm this twin hypothesis. How do we test it out, though?

For the first part, I've grabbed 2009 pitch F/X data from the StatCorner database for every pitch Pedroia's seen this year. For simplicity's sake, and because it gives a much bigger sample, I've decided to lop off the 'fastball' part of this little theory. Below is a chart of everything thrown to Pedroia this year. Also shown is the strike zone zoning I've used. Left on the graph is in, right is away, and I'm going to trust my readers enough to tell up from down. 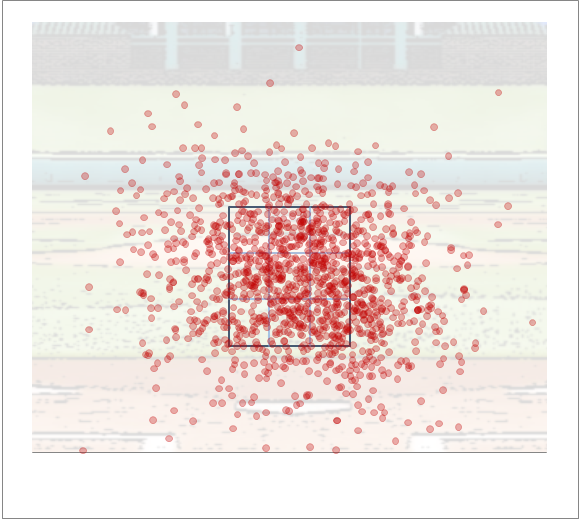 Obviously it's a little hard to draw any conclusions from that, but it gives you a pretty good idea as to the way pitches have been distributed - all over the place. In order to get any idea as to which ones Pedroia hits best, we're going to have to actually look at the numbers.

First, I discard everything not in the strike zone. This seems like a pretty big deal since it removes a fair amount of hits, including XBH, as well as taking out most of his swinging strikes, but when I did bother looking at it it didn't change my conclusions much -I won't bore you with extra work for no reason. Next, we chose which metrics we value.

I'd argue that the following are important (and feasible to extract from raw pitch FX data) for explaining a lack of power:

With these chosen as my value metrics, it's a relatively trivial task to set up a spreadsheet to crunch the actual data for us (which I hope I've done correctly). The table below shows each of the above numbers for each zone. Which zone is which should be self evident, and green/red cells show positive/negative outcomes from Pedroia's standpoint. 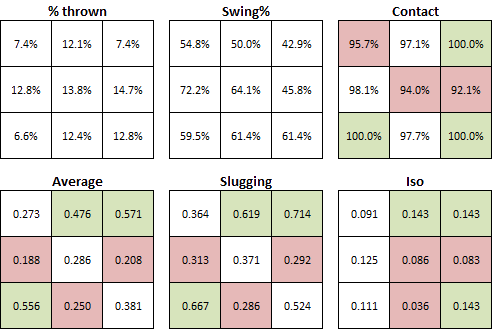 That's not what was expected, not at all. While it does confirm that Pedroia can't do much to hurt you with the high-inside pitch (an isolated slugging% of 0.091 on pitches you hit would put you in the company of such luminaries as Willie Bloomquist), a much more surprising find is that he's just as bad with pitches straight down the middle, which is an area hitters normally feast on. The fact that he's slugging just .371 with an iso of 0.086 on pitches thrown straight down the pipe is absolutely bizarre. Pedroia's best zones by my analysis are high-middle, up and away, and down and in, for which there's no obvious reason. He's hitting .556 on pitches down and in and a few inches above that he's hitting .188. This could well be a sample size issue, as the number of pitches considered in any zone is fairly small even over half a season.

You can actually get a fair amount of interesting information off of these charts, most of which is only tangentially related to my original idea. Considering the problems Pedroia's been having elsewhere and that only 7.4% of pitches hitting the strike zone are making their way up and in, it's probably fair to say that part one of my hypothesis was way off base. Sure, he can't hit very well on the high inside fastball, but Pedroia has bigger issues to worry about. So since we have the data on hand, let's go over other random things of interest:

That's part one done and more or less disproved. How about my hoping that pitchers were paying more attention to their televisions than their advanced scouts, and are throwing Pedroia more high-inside pitches this year than last?

So that's a no then. Where's the fun in that? They've done the exact opposite, moving away from the upper left edge of the strike zone, shifting heavily down and away, which ironically is one of the locations where Pedroia is actually doing damage. Why? I'd have to imagine a guy who slugged around .500 last year scares pitchers, and when you want to limit extra base hits, staying down and outside is where you want to be. That sort of thing apparently matters more to pitchers than video game commericials, which has quite frankly ruined my day.