I'm very, very excited by what we can do now with Sean Smith's updated WAR database.  The top 300 player index hasn't been updated yet, but I don't need the index to know who 5 of the best players of all time were.  For our first look into the golden age of baseball, I picked the top 5 players listed by the Society of American Baseball Research (more commonly known as SABR) from their 1999 top 100 list: Babe Ruth, Lou Gehrig, Ted Williams, Hank Aaron, and Stan Musial. Here are their careers by Wins Above Replacement. 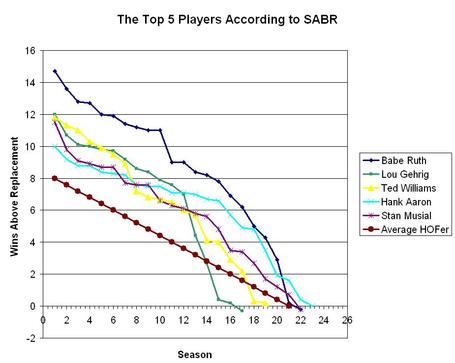