Share All sharing options for: Graph of the Day: 2009 All Star WAR Matchup

The 2009 All Star teams were announced yesterday in preparation for the July 14th game at the new Busch Stadium in St. Louis.  While many are going to be identifying the unworthy (Jonathan Papelbon, Josh Hamilton) and the snubs (Matt Kemp, Brandon Inge - who are the most deserving of the final spots based on value this season in case you were wondering), we're going to start with the head-to-head matchup.

The bars on the positions represent the 2009 WAR for the starters at each position based on Fangraphs WAR; red for AL, blue for NL.  The bars across deep center field is the 2009 WAR for each roster broken up by roster spot.  Position players are on the left, pitchers on the right. I know the NL is likely going to lose two of the starting outfielders to injury, but we'll go with the rosters at this point. 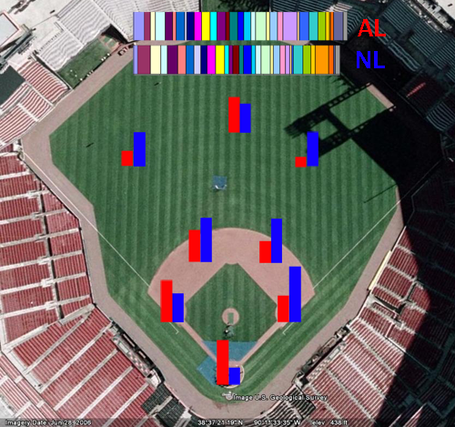