Why it Matters: Umpires, Computers, Wins, and Dollars

Share All sharing options for: Why it Matters: Umpires, Computers, Wins, and Dollars 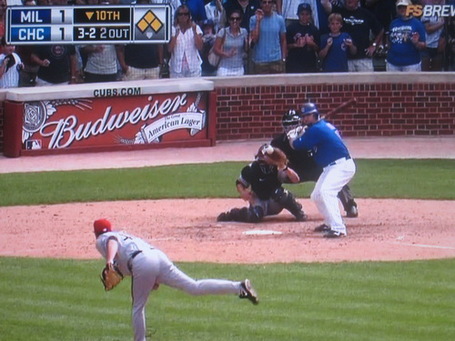 Why should you care, unless you're also a Brewer fan?  The Brewers did it to themselves to be facing the bases loaded situation, anyway.  Besides, that pitch isn't unquestionably a strike - it's pretty close.  The Brewers had plenty of chances in any number of other innings to score a run and make the extra inning situation moot.  Watching post-game shows and reading reactions around the media, these kinds of excuses have been given over and over again to bring attention away from the ridiculousness of this call.  Especially if you're not a baseball fan, it would be easy to dismiss my anger towards this pitch as the simple ravings of an annoyed fan.  This blog is supposed to be all about objectivity, isn't it?  Why am I even bringing this up?

This is why I'm bringing it up. 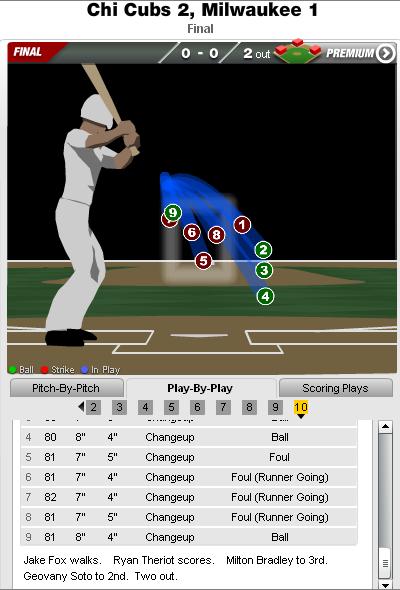 This is objectivity.  The cameras that PitchFX uses don't blink.  They don't get crossed up by a curveball.  They don't open up the zone on 3-0.  They don't give the outside pitch against left handed batters when they won't give the same inside pitch against right handed batters.  Does it lose the human element of the game?  Absolutely, it does.  And that's what I am asking for, here, in this space.  Objectively, this pitch is a strike. From our own Harry Pavlidis, an alleged Cub fan:

It is possible to clearly establish a bottom and top of the strike zone.  We have the rulebook 17 inch plate.  The rules for the Major League strike zone are clear and concise.  From Rule 2.00 (definition of terms)

The STRIKE ZONE is that area over home plate the upper limit of which is a horizontal line at the midpoint between the top of the shoulders and the top of the uniform pants, and the lower level is a line at the hollow beneath the kneecap. The Strike Zone shall be determined from the batter’s stance as the batter is prepared to swing at a pitched ball.

If we feed the tops and bottoms of each player's strike zone into a database, we should quite easily be able to call balls and strikes using Pitch F/X or any other well-calibrated, accurate, position-computing system.

Of course, all that I've typed out above is my own personal, idealistic rant about why I think computers should call balls and strikes.  Let me show something, using the aforementioned game between the Cubs and Brewers, that is presented in a language everybody, regardless of their involvement in baseball, can understand.

Those of you that have been reading Beyond the Boxscore for a while will recognize some of our figures and studies regarding the cost of a win.  Here, Sky shows the average cost for each extra win last year was roughly 2.4 million dollars.  Looking at today's Cubs/Brewers game over at FanGraphs, we can see how win probability changed with each play.  Here's the play log for this game.  The final play resulted in a -.334 win change for the Brewers.  If the pitch had been called a strike, however, the win probability after that pitch would've been .500 instead of .000.  Essentially, that call cost the Brewers half a win.  That single event cost the Brewers half a win.

The ideas of "costing wins" and "marginal wins" are certainly abstract, I will admit.  Whether or not you want to believe in win probability and wins above replacement and all these new, abstract statistics, you will certainly agree with the following statement.  Sports franchises spend money directly to win games.  With our data, we are valuing a win at 2.4 million dollars.  Then, it follows that the final call in today's Brewers/Cubs game cost the Brewers 1.2 million dollars.  It ripped 1.2 million dollars out of the pocket of the Brewers and put it in the pocket of the Cubs.  Regardless of what the "true" value of a win is, that call cost the Brewers some amount of money and rewarded the Cubs another amount.

The play we're looking at here is about as high a magnitude call as a ball and strike call can possibly be: either the game ends, or a new inning starts.  Still, even the most insignificant of calls don't deal in mere pocket change.  How about, for example, expanding the zone on 3-0.

Harry's Pitch FX work has also provided us with linear weight values for balls and strikes, based on count.

Many announcers like to talk about how the umpire will open up the strike zone on 3-0 counts.  Whether or not this actually happens would require a study of 3-0 pitches, of course.  However, simply for illustration, I would like to use it as an example of how significant a seemingly unimportant call can be.  On 3-0, Harry has the run value of a strike (ValS) at -0.070.  That is, a strike costs the batting team .07 runs.  Admittedly, a pretty small value.  On conversion to wins, assuming the standard 10 runs per win, this is even smaller.  The average 3-0 strike costs the batting team .007 wins.  To convert wins to dollars, however, using Sky's figure of 2.4 million dollars, still gives the non-trivial dollar total of 16,800 dollars. The salary of a low-minor leaguer, perhaps.  Or the cost of hiring a part time menial worker in the front office.

The point is, the calls we're dealing with  and arguing about are important in the context of Major League Baseball, and there's no reason, given the technology and other resources available, that teams and players should constantly have to deal with missed calls from umpires.  Yes, the human element is gone.  Then, perhaps, we can actually worry about real Major League Baseball, a beautiful game based on a beautiful set of objective rules, played at the highest level by the most talented players in the world.

Update by Sky: Tommy Bennett has a great post up rationally evaluating the use of "fairness" to judge human vs. computer umpires.  His point is that entertainment is the main goal of baseball, not fairness.  His writing might be what people always call "the human element" but this is the first time I've seen a thorough rationalization that serves as a good argument, instead of just a throw-away line.