Share All sharing options for: Graph of the Day: Aroldis Chapman's Fastball

Cuban pitcher Aroldis Chapman raised eyebrows around the baseball world this spring.  Pitching for the Cuban team in the World Baseball Classic, Chapman flashed an incredible fastball and some nasty secondary stuff, despite some poor results (6.1 IP, 4 ER, 8 K, 4 BB).  Those who hadn't noticed Chapman prior to this year's classic were certainly struck when he hit 100 MPH on the gun in his start against Japan at Petco Park.  Now, at age 21, he may be the most prized prospect in the world.  Unfortunately, his aforementioned WBC appearance is all we have in the Pitch F/X database on him.  Brooks Baseball's WBC database has Chapman's average fastball at 93.47 MPH, but thanks to Harry's great work on identifying pitches, we can throw out some pitches that were either splitters or changeups and come closer to how fast his actual fastball darts to the plate.  Harry's data has the average Aroldis Chapman fastball at 94.6 MPH.  Here's how it stacks up to Major League starters. 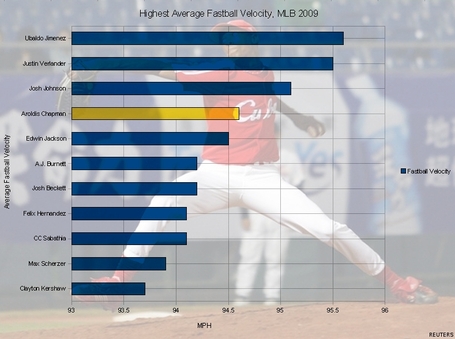 Based on Chapman's start from March, he would already have the 4th fastest pitch among starters.  Not only are these pitches fast, but they are very, very effective at getting MLB batters out.  Here's how the other 10 pitchers show stack up by Pitch Type Linear Weights, via FanGraphs

8 of these ten are in the top 35 among starting pitchers, and 6 are among the top 15.  If Chapman's stuff lives up to its billing, we could be looking at one of the top starting pitchers for years to come.