A Phillie Phleecing? Is Halladay Worth It?

Share All sharing options for: A Phillie Phleecing? Is Halladay Worth It?

he hot rumor over the past few days has been Roy Halladay heading to the Phillies for a package containing pitchers J.A. Happ and Kyle Drabek and outfielder Dominic Brown.

At least that was Ricciardi's request.  The Phillies are said to prefer to keep Drabek and include Carlos Carrasco.  As of midday Saturday, it's unclear where things will go from here.

Do either of these deals make sense for Philly?  Let's use Sky's trade value calculator and find out.

Update: I missed Dominic Brown's rise up the prospect lists and that changes things quite a bit.

I'm taking as given Halladay's $23 million surplus value (which Sky explained here).  The Phillies are already extremely likely to make the playoffs according to our latest playoff odds, so there's no bonus available there.

What would the package of Happ, Drabek and Brown be worth?

J.A. Happ is a difficult commodity to value.  Coming into this season, John Sickels rated him the Phillies fifth best prospect.  Happ received a B- grade and a comparison to Mark Redman.  Since that time he's found a place in the Philadelphia rotation and started his career 7-0 before dropping his first game last night.

Using the B- grade from Sickels, we estimate Happ's value at $7.3 million.  But if we consider his success this season and value him as a bona fide major leaguer, we get a very different valuation. 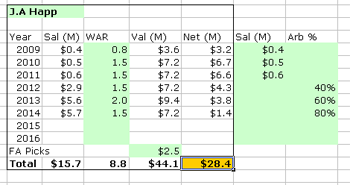 The WAR totals assume he's pitching over his head so far this season, and that he's a lesser version of Mark Redman going forward.  We can fairly call them conservative.  As you can see, even with those caveats, this way of valuing Happ has him as more than a match for Halladay himself.

But is it fair to let a good half season of play increase his surplus value by $21 million?  Perhaps, but perhaps not.  Let's err on the side of caution and split the difference between his minor league value and his projected major league WAR value.  That leaves Happ at 7.3 + 28.4 = 35.7 / 2 = $17.9 million.

Kyle Drabek was recently named to Baseball America's mid-season top 25 prospect list.  According to Victor Wang's list of prospect values, that means Drabek has a surprlus value of $15.9 million.

Prior to the season Dominic Brown was rated by Sickels as the Phillies number six prospect, and was given a grade of B-.  He's done well this season and moved up to number 17 on the top 25 prospect list. That puts him worth $25.1 million.

Add those three up and the Blue Jays are asking for a package of just about $59 million. That's an astounding $36 million return from the trade.

What would happen if Carrasco replaced either Happ or Drabek in the deal?

Carrasco was Philadelphia's top prospect this offseason according to Sickels with a B to a B+ grade, but he didn't make the Baseball America top 100 list.  That puts him somewhere around $10 million in value.

So now we have three possible packages for Halladay's $23 million in value:

No matter how you look at it, the Blue Jays are getting an amazing deal here.

The latest news is that the Phillies have said "no thanks" to the offer on the table.  It's unclear what the teams will do from here.

Either way, it's going to be fun to watch the negotiations proceed over the next week.  Stay tuned for further developments.