Is the Craig Biggio the 35th Greatest Player Ever?

Share All sharing options for: Is the Craig Biggio the 35th Greatest Player Ever?

I have been doing some work on Negro League history and was looking at the all time rankings in the last Bill James's Historical Abstract. I saw Craig Biggio ranked as the 35th greatest player of all time using his formula of peak years, total production and other intangibles. Bill gives an explanation of his reasoning for having Craig so high, but I just can't buy it even though the publication is dated a bit.

The two hitters above and below him on Bill's list were Arky Vaughan, Pete Rose, Eddie Matthews and Carl Yastrzenski. Off the top of my head, I would consider the former 3 much better than Biggio and after doing a little reading Arky Vaughan was a great shortstop that ended up giving up the the second half of his career to the military for WWII. Here is the 5 batters with there Bill James ranking, WAR (from Rally's Database) and Win Share rankings and lifetime totals [Bill James ranking includes pitchers, but the WAR and WS values are for only batters].

It can be seen that Bill's rankings are based on his win shares (which reward long term consistency, vice above average/replacement production). Looking at the WAR values though, Biggio is not within 9 WAR of any of the other players and there are 52 hitters between him and Mathews. Biggio was a good player, but he is not the same caliber player as these four. The compatibles in the WAR list (Ron Santo,Gary Carter, Rafeal Palmeiro and Jim Thome) seem to me to be a better fit.

Of course, what would an article comparing players at Beyond the Box Score be without a WAR comparison graph. 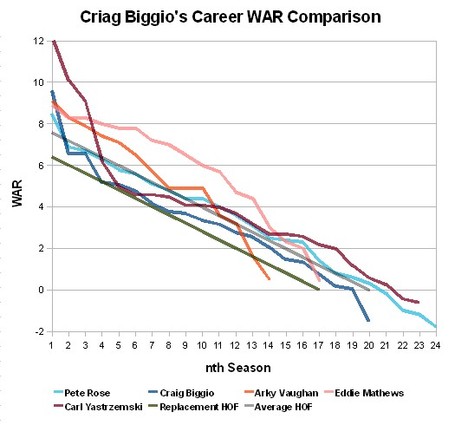