Share All sharing options for: New Arm of the Week: Mat Latos

Mat Latos went from Futures to Majors in a week. Latos' debut with the Padres came on Sunday, making him the only rookie pitcher to make his debut in the weekend after the All Star break. Latos throws two fastballs (four-seam and two-seam), a breaking ball (let's call it a slider) and a straight change-up, according to KFFL:

Chris [Hadom] informed me that Latos actually ditched a knuckle change in favor of one with a more traditional grip.

Here's what I found, including the inning from the Futures Game: 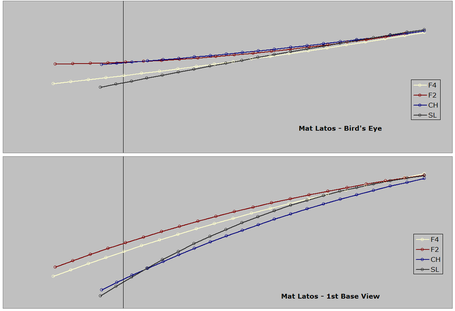 Warm-ups from his debut:

Take a look at the three sliders. #3 (shown in yellow) had less sink and more sweep. #2 (dark red) is about the same as the average variety (shown in bright green), #1 was the most curve-like of the bunch, sinking without sweeping like a 12-6 pitch. 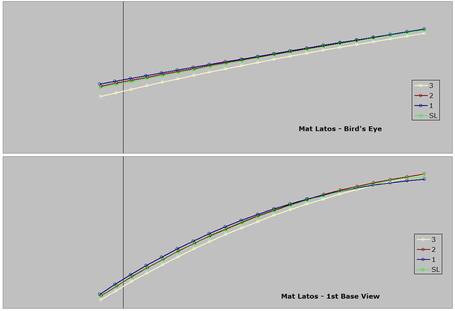 Type "3" sliders appeared only at the end of his final inning on Sunday. Something to watch for next time out.