The Colorado Rockies were one of the best teams in June. One reason for that was Jason Hammel just happened to be one of the major's best pitchers in the month. The former Tampa Bay Rays swingman is now a staple in the Rockies rotation. Hammel went 4-0 with a 3.41 ERA in five June starts. His FIP was an even better 3.00.

Even with above average stuff, Hammel hasn't racked up many K's. His K/9 for the season is a meh 6.25, but improved control has put his K/BB at nearly 3.0 (2.95). After his lastest outing, a complete game five-hit one-run performance (loss), he has been worth 1.9 wins above replacement this year.

Overall, Hammel's HR/9 is down less than 1.00 this year, but that's jaded by an extreme home/road split. He has pitched 50.1 innings on the road and allowed just two homers (0.36 per nine.) At the homer friendly Coors Field, he has allowed five homers in just 30.1 innings (1.50 per nine). Still, his home runs have regressed none the less. 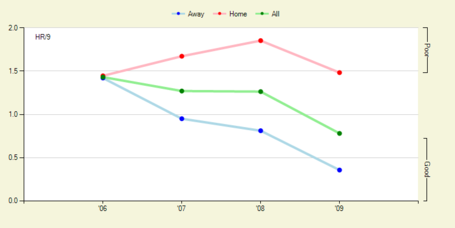 The biggest change for Hammel has been the cut in walks. During his Rays career he averaged a BB/9 of 4.17. This year he is sitting at 2.12 and was under 2.0 in the month of June. Like fellow former Ray, Edwin Jackson, it seems that Hammel has gotten control of himself; literally. In his last five starts (32.2 innings) his K/9 is nearly 7.0, while his walks are down to just 1.39 per nine. 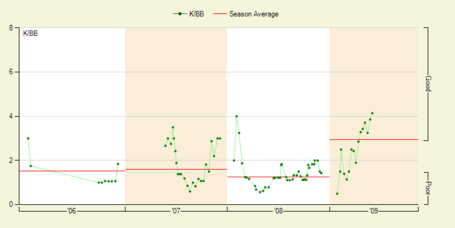 Stuff wise, he isn't throwing much differently than his Tampa Bay days. He is throwing slightly less fastballs (59.9% in 2009, 61.1% career) while throwing a few more curves (14.3% in 2009, 12.3% career). He has continued to mix in his slider and his change up as well. Unlike some of his former brethren in the Bay Area, Hammel has not seen a significant drop in velocity. His fastball is still around 92 mph while topping out around 95. Hammel always had good enough stuff to get swings and misses and this year he is doing that well. His swinging strike percentage is nearly 13%.

It's hard to find a fluke in his 3.90 ERA/3.52 FIP. His .326 BABIP is right inline with his career .325 and his LD% is actually up 2%. He's stranding nearly 67% of his runners which is slightly below his career average. As mentioned above his home runs are down and while his HR/FB of 8.3% is pretty low and probably unsustainable for a guy who gives up his fair share of fly balls, it's not totally out of the realm of possibility that he keeps it within that range. Aaron Cook and Ubaldo Jimenez both pitched over 190 innings for the Rockies last year with lower HR/FB rates.

Hammel found himself as the odd man out in the Rays rotation battle this spring. Rather that see him go on waivers and possibly grabbed by another team, the Rockies stepped up to the plate an offer a mid level prospect, Aneury Rodriguez, for him. While Rodriguez, 21, struggles in Double-A, it's too early to say the Rockies won this trade hands down. Hopefully for the Rays sake it works out for both parties, but right now it is definitely Hammel time in Colorado.

(H/T to Fangraphs for the stats/graphs)