Share All sharing options for: Looking to Refine FIPs with Pitch F/X

FIPs measures 3 factors that totally dependent on the pitcher, strikeouts, walks and home runs. A player's strikeout and base on balls numbers are fairly consistent if a player changes ball parks, but the number of home runs he gives up may change depending on the park. The Hardball Times tracks xFIPs which counts every 11th (league average) fly ball a home run.

A while back I did a piece on Randy Johnson for Driveline Mechanics and found that Randy was leaving the ball higher in the strike zone than he did previously. Most of the home runs he allows was higher in the zone and this led him giving up more home runs this season..

Putting these two ideas together, I looked to see if a pitcher's home run rate correlates to the number of pitches thrown into the heart of the plate (area where the average home runs is hit from) . First I took at all the Pitch F/X available for 2007 to 2009 (I ran the queries a couple of weeks ago, so the 2009 data is from around July 1st). I took the normal strike zone of 1.5 to 3.5 vertical and -1.2 to 1.2 horizontally and saw how many pitchers where in this zone and how many home runs were hit. I began to shrink the zone down and noting the percentage of home runs hit from that area until I got the the area where 66% and 50% of the home runs was hit from. The following graphic and chart shows the 3 zones: 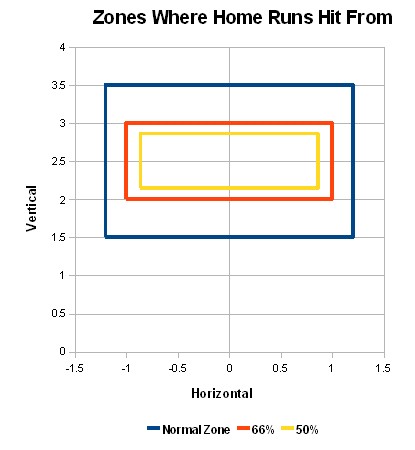 After creating the three zones, I looked at the 88 qualified pitchers from 2008.and saw how many home runs they gave up when throwing pitches into these zones. I graphed the percentage of pitches (using zone, not umpire calls) in the zone to the number of home runs to see how well the data correlated as seen in the following graphs (one of the 66% HR zone and one of the 50% HR zone): 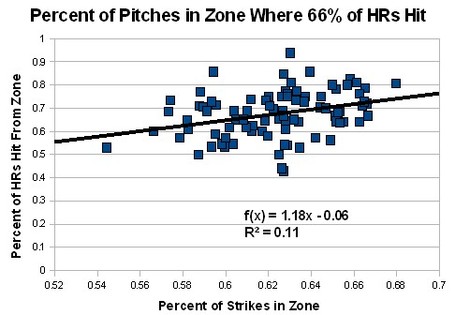 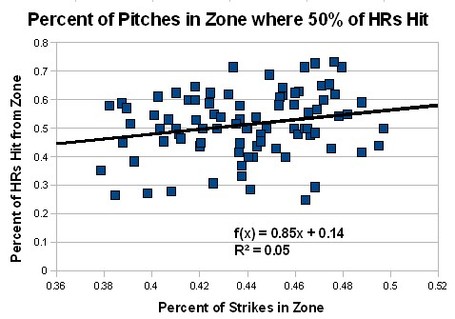 to pitching to the zone where home runs's are given up and actually giving up a home run. A little Master of the Obvious here, but it looks like different pitchers have different abilities. I went on to compare throwing to the heart of the strike zone to the following variables and not one had an r-squared over 0.07: BABIP, GB/FB, LD%, GB%, FB%, HR/FB, HR/9, ERA, FIP.

What I was looking for doesn't seem to simply exist and I have thought of few way to modify search. Since I have the data readily available, here are the 2008 leaders and laggards in Heart Pitches per HR with the average value at 32.1:

I didn't find exactly what I was looking for when I began looking at this data. I feel Pitch F/X numbers can be used to help determine the true value of pitchers and batters, but this method does not seem to be one of those cases. I might divide out speed, type and movement of pitch at a later date, but for now I am settled on using FIPs and xFIPs.