Share All sharing options for: What's the Value of a Vernon Wells & Roy Halladay Trade Package?

Yesterday I took a look at Roy Halladay's context-neutral trade value and concluded that over the next one and a half seasons, his production and contract provide about $23M in excess value.  He's a good pitcher signed to a favorable contract.  Halladay currently has a teammate, Vernon Wells, who is not signed to a favorable contract.  Cot's lists his upcoming yearly salaries -- including the last half of 2009 and through 2014 -- at $0.75M, $21M, $23M, $21M, $21, and $21.  I won't debate the merits of that contract right now (I'm sure it'll happen in the comments, and my pre-emptive strike is that Wells was coming off seasons of 3.8, 3.1, and 5.8 WAR when the extension was signed) but suffice it to say it no longer looks pretty, if it ever did at all.

Over the last three seasons, including 2009, Wells has recorded Wins Above Replacement totals of 0.8, 1.2, and -.8, an average of just half a win per season.  If he keep up that pace through 2014, the Blue Jays will be wasting a ton of money on near-replacement level talent.  If they can dump his contract, maybe by giving away Roy Halladay along with him, they should go for it.  Should any team be willing to take it on?

Plugging Wells' contract info into the Trade Value Calculator, along with his current production rate of .5 WAR per season, it's not pretty at all: 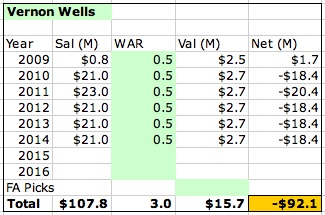 That's not a typo: Wells' contract is on pace to cost Toronto $92M more than paying a player of his recent caliber the going free agent rate.  If we compare that to Roy Halladay's +$23M figure, it means the Jays would need to include four Roy Halladays along with Vernon Wells and receive nothing in return in order to make it a fair deal.  J.P., got any more Halladays lying around?

Some will argue that Vernon Wells is better than this.  Maybe he got a little lazy after after signing the big contract and breaking his wrist surely didn't help his production.  How much would he need to rebound in order to simply offset the value of one Roy Halladay?  That is, how many WAR per season would he need to average throughout the rest of his contract to have his trade value be worth -$23M?  Open Excel, change numbers, say voodoo spell, boom: 3.0 WAR.  That would be quite a rebound.  And remember, that's just to make fair a trade in which the Jays send away Wells and Halladay in return for nothing.

What if Wells rebounded enough to justify the contract on his own, relative to what you'd be willing to pay him as a free agent?  Well, that would take 3.9 WAR per season through 2014, a level of production Wells has hit twice and exceeded once.  Even at that level of production, he would have zero trade value.

Sky's Tip of the Day: If you're a major league baseball general manager and anyone from the Blue Jays front office calls you up and even mentions the name Vernon Wells, immediately hang up, unplug your phone, announce a code Dunn over the PA, and organize the entire building's retreat into the sub-basement biodome where you won't come out until after 2014.  (Don't forget the Twinkies.)

In regards to shedding Wells' contract, I've heard some people say that the Jays wouldn't spend any money they saved on Wells on other players.  And while cost efficiency is important, at least the team's getting some production out of him.

One, I doubt the Jays are going to pocket $21M per year.  They might not sign free agents with the money, but with Ricciardi's eye for young talent, they'll certainly have some arbitration bills to pay and young studs worth extending.  But two, even if the Jays only put $2.5M per year back into the team, they could sign someone of Wells' production level.  That's pocketing 88% of the contract and winning just as many games going forward.

Let's say the Jays did re-invest all of Wells' money and didn't even do it more efficiently than signing free agents.  That money would buy them 4.7 WAR per season from 2010 through 2014.  By keeping Wells, they're expecting .5 WAR per season, so spending differently would net 4.2 WAR going forward.  Four wins. Yeah, it's a bad contract.