If every single one of my posts for the rest of the season talked about Zack Greinke, it would hardly do him justice. Greinke drew a lot of attention earlier in the season for an earned-run-less streak which seemed to span several ice ages, but when it melted away he faded back into relative national obscurity. It's hard being a Royal sometimes, and Greinke probably suffered from being one of the few bright spots in baseball's most arid talent desert when Joe Maddon made his choice of starting pitcher for Tuesday's All-Star Game in St. Louis. On top of the ignominy that comes from playing a team which willfully traded for both Mike Jacobs and Yuniesky Betancourt within the span of nine months, Greinke remains essentially anonymous for another reason. After bursting onto the scene as one of baseball's brightest young pitchers in 2004, his career began foundering when Greinke began suffering from a complex psychological disorder which I shall uncharitably call 'the crazies'*. His inspirational comeback last year paved the way for his reestablishment as an impact played this year... and he's succeeded far beyond anyone's expectations.

A few years ago, I read an article by a friend of mine on evaluating pitchers, which listed run values for events theoretically under a pitcher's control (i.e. your standard K/BB/HBP/HR plus batted ball profile). Towards the end of the piece, Dave lamented that there was no statistic that could complement Tom Tango's FIP (Fielding Independent Pitching) as a quick measure of pitcher value by looking at batted ball profiles. As these were the halcyon days of studenthood, I had a lot of free time, and so I set about to correct this. The result is tRA, which I've discussed previously here and here (the latter is for those who'd prefer less mathematics in their everyday lives). In case anybody hasn't heard of tRA before and doesn't feel like clicking on links, I'll quickly summarise below:

tRA is a linear-weights based pitching metric which takes a variety of events which are under more or less sole control of the pitcher, finds the average run and out value of said event across the league, and applies those numbers to an individual pitcher after park adjustments. This results in a number on the runs/9IP scale, which is slightly higher than ERA scale but makes a lot more sense.

Anyway, tRA and its derivatives are my prefered metrics for pitcher evaluation, so expect to see it mentioned reasonably frequently in these pieces. Any manipulation that's done using FIP can also be applied to tRA, meaning it's relatively trivial to find tRA versions of pRAA (pitching runs above average) and WAR (wins above replacement). And by both pRAA and WAR Zach Greinke's having one of the best pitching seasons in the past decade.

Greinke's 6.2 WAR at the All-Star Break puts him on pace for an 11.6 win season. For reference, here is a list of all of the players worth more than 10 WAR since 2002: Barry Bonds, Barry Bonds, Barry Bonds, and Adrian Beltre. Granted, some pitchers come extremely close, but since Greinke's looking at more than 11, it's a reasonably fair cutoff. Since we've started measuring this sort of thing, nobody's managed to do what Greinke's on pace for, which would imply that it's probably comparable to the great Pedro Martinez seasons of the late 90s.

How good is he compared to his peers? Over the last few days, I've been hearing some AL Cy Young talk, generally debating the merits of Roy Halladay, Felix Hernandez, and Zack Greinke (Verlander deserves to be in the conversation too, but he generally isn't). Comparing them with straight up seasonal stats isn't close. Greinke's pRAA of 43.4 wipes the floor with Hernandez's (25.1) and Halladay's (22.0), and the tRAs aren't close either. Are the other two any more consistent than Greinke? We look at game-by-game tRAs of this AL 'Big Three' in the following graph: 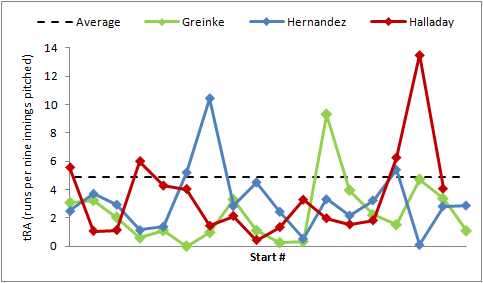 The dashed line on the above graph represents the league average pitcher. Greinke has had exactly one start in which he performed worse than a #3 pitcher. One. Felix Hernandez has three, Roy Halladay has four. But such a chart does not tell the entire story. Imagine cherry picking the best games of the season for each pitcher. Over some number of starts, one of Felix and Halladay, dominant pitchers in their own rights, has to have been better than Greinke, right? Er, no, actually... 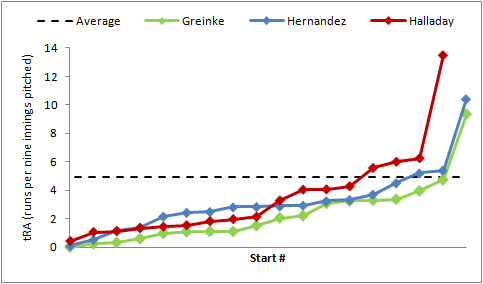 You can take Halladay's starts, arrange them in order from best to worst, and none of them beat Greinke's equivalent. Doing the same thing with Felix yields exactly the same result (but it's a little closer at the back end). This result is pretty spectacular, and goes to show just how dominant Zack Greinke has been this year. Between #1 and #18 on that graph, Greinke has Halladay and Hernandez beat. For each start the other two have made this year, Zack Grienke has made a better one. Wow.

As for Cy Young voting and All-Star Starter status... taking both as pure statistical exercises leads to the conclusion that Greinke's only actual competition for the honours would be if Halladay and Hernandez somehow combined into one super-pitcher. Zack Greinke's been the best pitcher in the American League this year and it hasn't been particularly close. I just hope he gets some recognition for it at the end of the year. He'll need a good defence and offence to keep his ERA down and wins high enough to compete with the other candidates and oh god they just traded for Yuniesky Betancourt so nevermind.

*NB: I said I was being uncharitable, so there's no need to complain further about my world choice.