What's a Fair Return in a Roy Halladay Trade?

Share All sharing options for: What's a Fair Return in a Roy Halladay Trade?

I have a great idea for a high-impact trade target that nobody's talking about: Roy Halladay.  There would probably be a team or two interested, don't you think?  If I see any further mention of this possibility, I'll let you know.

Pulling my tongue out of my check, dissecting the Roy Halladay rumors is a pretty fun exercise.  While the AL East is stacked, it's not a foregone conclusion that the Jays are out of the running this year (or next), so any return offer would need to blow the Jays away with top prospects or include some quality MLB-ready talent.  How do we weigh the value of Halladay versus a return package?  Well, how about objectively, with a nifty trade value calculator?

Sure, there are contextual factors related to the Jays and potential trade partners to consider, but a context-neutral analysis is a great place to start.  Let's take a look at Halladay's value and the potential value of offers from interested teams.

The Blue Jays are looking to acquire young players with more cost-controlled years than Halladay's 1.5.  Whether the young players are minor league prospects or early-career major leaguers, the method of cost-savings is obvious -- these guys won't make any money their first few years in the big leagues and will be paid less then free agents during arbitration.  Therefore, they don't have to be stars in order to help their teams as much as free agent stars, because they earn much less money.  The Jays are trading value now for value later, when it will hopefully do more to help them reach the playoffs.

Thanks to Victor Wang, we have a good guess as to the future net value provided by prospects of various standing.  Erik Manning compiled this chart:

It's apparent that a stud position player prospect would be more than enough of a return for Halladay on his own.  Looking at Baseball America's mid-season Top 25, that could be Jason Heyward, Mike Stanton (not that that Mike Stanton), Jesus Montero, Justin Smoak, Buster Posey or Carlos Santana (not that Carlos Santana) .  I'm not a prospect guru, but there are probably some tiers even within those guys.  And a lesser position player prospect, someone between the top ten and top fifty of all prospects, looks to be exactly an even trade.  Once you start talking lesser hitting prospects or pitchers, however, you're talking at least two.  And moving down into the B levels (pitchers or hitters), you're talking about half a team of prospects in return.

Here's a quick and dirty estimate of what prospect packages would equal Halladay's trade value.  Based on past trading history, some are more likely than others.

Many teams appear seriously interested in Roy Halladay, including the Cardinals, Phillies, Angels, and Dodgers.  Let's take a look at some of the fair packages each team could put together.

Brett Wallace (3B) appears to be the center piece of a deal, and as a top 25 position player prospect, would make for an even trade by himself.  The Jays are asking for another pitching prospect or two, and while the Cardinals don't have a whole lot there after trading Chris Perez, it wouldn't take a whole lot more for the Jays to come out winners.  Jess Todd (SP) and Daryl Jones (OF with good OBP/defense) are the only other prospect options at a B level or higher.  I know Erik would laugh at the idea of Jones included with Wallace, though.

While everybody's raving about the Phillies' pitching prospects, they only had one ranked in Baseball America's Top 100 before the season, Carlos Carrasco.  Mid-season, however, Kyle Drabek has cracked the Top 25.  Both of those guys would be woth $15M in excess value going forward, while B-prospects J.A. Happ and Jason Knapp are each about half as valuable.  Just looking at pitchers, then, one from each group would make for a fair trade, while two of the studs or three of the four would tip things in the Jays favor.  How Pedro Martinez looks over the next two weeks will go a long way towards determining how much of their future the Phillies are looking to sacrifice.

The Phillies do have some quality position player prospects, though, too, namely Dominic Brown and Michael Taylor, two outfielders who both made BA's mid-season top 25, plus Jason Donald (INF) who was a Top 75 pre-season pick.  That's an expected value of $25M each for the two otufielders and $15M for Donald.  Maybe the Jays strategy is to push for multiple pitchers, then "settle" for just one plus a blue-chip outfield prospect?

Brandon Wood.  If you call him a B level prospect like John Sickels has, that's only $7M in excess value.  Bump him up to a Top 100 prospect then he carries more like a $13M trade value.  If you're even higher on him and assume he can be merely a 2 WAR player for six seasons, he'd provide $38M in excess value: 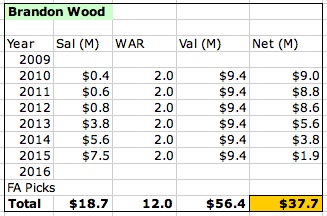 Getting a little crazy, if Wood is a 4 WAR player, that would be $76M in excess value.  As these examples makes clear, prospects who pan out provide an amazing amount of excess value, and the only reason we don't expect them to be that valuable as minors leaguers is the high rate at which they don't live up to expectations.  There's a lot of gambling going on with prospects, but the larger a stable of them a team accumulates, the more viable a youth-centered strategy becomes.   [End of Poz-style aside.]

Being conservative with expectations, the Jays would need more than Wood in return for Halladay, and the other Angel options in the minors are sparse.  Jordan Walden (SP) cracked BA's Top 75 pre-season, while Hank Conger (CA), Sean Rodriguez (2B), and Sean O'Sullivan (SP) were B-level prospects.

If I were the Dodgers, I wouldn't look to acquire Roy Halladay this season, as they're virtually guaranteed a playoff birth. With the flukiness of the post-season, the high cost of a trade wouldn't result in a significantly higher probability of winning the World Series.  If they're thinking forward to next year, why not see if he's available in the off-season at a lower cost or put their money into free agents?

The great thing about analyzing trades like this is I'm making it quite apparent how I've valued (via help from others) Roy Halladay, various prospects, and young major leaguers.  If you disagree, even subjectively, you can present your argument in the same language I did.  Think Jason Donald is a Top 10 prospect?  Change his value accordingly.  Think Doc's heading for a serious injury?  Drop his expected WAR and re-run the numbers.  Now, you'd have to convince me those opinions are valid, but at least I know how our opinions compare.

To end, I'd be remiss if I didn't mention again that not all teams are in the same situation, both for 2009 and beyond.  The Jays are a long shot to make the playoffs this year (although they still have a non-zero chance) while the Cardinals will see their playoff chances increase dramatically with each additional win.  To the Cardinals, $20M in excess value two years down the road might not be as useful as $10M in excess value now, making a seemingly lopsided trade worth it.  How do we handle that piece of the puzzle?  Hopefully I'll be back in a few days with the answer.