Now that reports have confirmed Pedro Martinez and the Philadelphia Phillies agreeing to a 1 year, 1M deal (plus a possible 1.5M in incentives), it is time to analyze the impact that this former star could have on the National League East race.  The Phillies are currently sitting at 48-38, 4 games in front of the second place Florida Marlins, 6 in front of the Atlanta Braves, and 6.5 in front of the reeling New York Mets.  The lead, while certainly not a runaway, is comfortable for the Phillies.  Baseball Prospectus has the Phillies at 56% odds to win the division, and Coolstandings.com puts them at 67.4% to make the postseason.

Right now, the Phillies are using Cole Hamels, Joe Blanton, Jamie Moyer, J.A. Happ in the first four rotation slots, and an amalgam of whoever is healthy in their system at the 5th slot.  So far, that spot has been filled by Brett Myers, Antonio Bastardo, and Rodrigo Lopez.  With Myers not expected to be back anytime soon and possibly lost for the season, the Phillies need to get some production out of that spot.  Bastardo and Lopez have combined for half a win in 33

⅔ innings, but both project for FIPs greater than 5 the rest of the way (5.03 for Lopez, 5.74 for Bastardo).  Add the fact that both are hurt now, and the Phils need for a replacement is even more glaring.

Before we analyze the current Pedro, let's not forget the greatness of his career. Here's his career path. 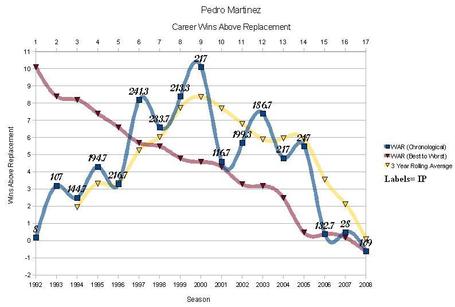 Certainly, Pedro is one of the best pitchers of our time.  However, over Pedro's last three years with the Mets, age and injuries have caught up with him.  FanGraphs and Rally's WAR disagree pretty heavily on Martinez over this period.  FanGraphs has Pedro at 3.4 wins over these 270 innings, while Rally has him at only .3 wins.  Statcorner sides with FanGraphs here, having Pedro at 3.3 wins over the same period, although Statcorner values Pedro's 2008 as below replacement, as does Rally.  Martinez's notable pitching statistics over this time look like this.

The story here is how well Pedro's defense-neutral stats look.  Every single year, he has outperformed both the major defense-neutral pitching stats.  He's maintained a high K-rate (although it dropped in '08), and a prettly low BB-rate (again, worse in '08).  His HR rate rose since 2005, but that's unsurprising given that his stuff isn't quite as sharp as it was back in his impressive peak years around the turn of the millennium.

Given his defense-independent success, projections were actually quite favorable for Martinez entering the season.  Here are what the four major projection systems expected out of Pedro this year.

Surely, a starting pitcher that could be counted on to put up these kinds of numbers deserves to be in the major leagues.  This year, fangraphs has the replacement level FIP at roughly 5.50.  Taking the average of these 4 projection systems puts Martinez as a 4.45 FIP pitcher.  Given that he will likely have to make 2 or 3 starts in the minors prior to joining the big club, a projection for 65 IP over 10-13 starts seems fair.  If he can hit that projected FIP number, Pedro will be worth roughly .75 wins above replacement in this second half for the Phils.  This IP number can be adjusted as you see fit - it may be too much to ask an injury riddled older pitcher to pitch 65 IP down an intense stretch run.

The deal is worth a potential 2.5M if Pedro earns all his incentives.  I would assume that he will achieve all incentives if he indeed pitches 65 innings.  Right now, with a win worth roughly 4.5M, a .75 win half-season from Pedro would be worth 3.375M to the Phillies, making the deal well worth it.  If Pedro performs close to a 5.00 FIP, he would also likely throw fewer innings, perhaps 55.  This peformance would be worth .3 WAR and only 1.35M.  The rough breaking point for the deal would be 60 innings at a 4.70 FIP, worth .55 wins.

Valuing this deal in a vacuum is probably not the best way to judge it.  With only 1 year on the contract and over 50% of its possible value coming in the form of incentives, the Phillies will only judge it on one criteria: does it help us make the playoffs?  With the holes in the Phillies rotation caused by multiple injuries, they are looking for any sort of above replacement production.  At this point, whether it's 50 innings of 5.25 FIP baseball or if it's 100 innings of 2.00 FIP baseball, Philadelphia will find the deal well worth it.  Pedro's projected performance in front of a very solid Philly defense will, barring injury, lead to a very happy partnership in the City of Brotherly Love.