Graph of the Day: The 2008 Rangers Outfield

Share All sharing options for: Graph of the Day: The 2008 Rangers Outfield

The Texas Rangers are in first place, and a lot of credit has been given to their improved defense.

Today's Graph of the Day looks at last season's outfield defense using David Pinto's Probabalistic Model of Range (PMR), which gauges the probability of each play being turned into an out by an average fielder. 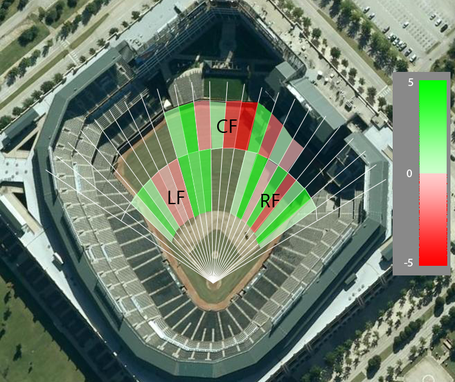 More info after the jump.

Interestingly, all three positions seemed to do poorly with balls right at them.  There were lots of different outfielders with playing time last season.

In LF: Brandon Boggs, David Murphy, Marlon Byrd and Frank Catalonotto all saw time in left.  Boggs was by far the best, but the left fielders in general were pretty good.

In CF: Josh Hamilton was the major culprit here.  He really does belong in a corner.  David Murphy wasn't much better in his limited playing time.  Marlon Byrd was pretty good in center last season.

In RF: Five different players got time here.  Murphy had the most and was quite good. Nelson Cruz was pretty bad in his short time there - although he appears to have improved this season.  Milton Bradley managed to play the field a little without hurting himself and was basically average.

All three outfielders returned from last season, although the playing time is being shared differently in 2009.  The Texas outfield wasn't horrible last year, so there's not as much room to grow as in the infield.

Speaking of the infield, you may see a bonus Graph of the Day tonight if I can finish the infield (there's a lot of overlapping zones so I'm trying to figure out the best way to accomplish the graph).