Graph of the Day – Comparing Defensive Numbers for Shortstops that played from 2002 to 2008.

Share All sharing options for: Graph of the Day – Comparing Defensive Numbers for Shortstops that played from 2002 to 2008.

In the the comments section of an article I recently wrote on infielder aging curves, I got into a discussion with NoNameOnCard about projecting UZR using only players who have played a position for a long period of time based on how they aged. Since UZR data is only available from 2002 to 2008 at Fangraphs, I decided to look to see if any shortstops, considered the most demanding defensive position, started 81 games at shortstop each year from 2002 to 2008. Five players made the list, Derek Jeter, Edgar Renteria, Jimmy Rollins, Miguel Tejada, and Orlando Cabrera. I plotted their UZR numbers for all 7 years according to their age, along with a reference line of the average aging shortstop. 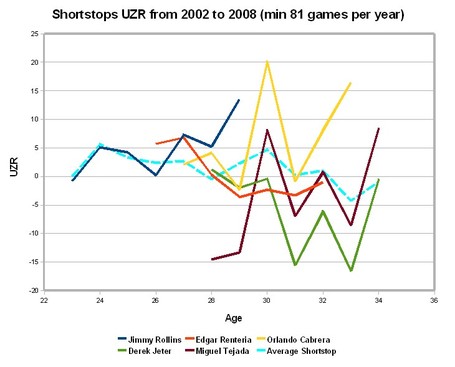 Observations from the graph: