Getting to know a draft prospect: Drew Storen

Share All sharing options for: Getting to know a draft prospect: Drew Storen 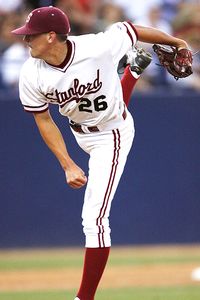 Last year we saw several college closers taken in the first round of the draft, including Daniel Schlereth, who recently made his debut with the Arizona Diamondbacks. When a team drafts a college closer, it is usually with the intent on fast-tracking to the big leagues. Drew Storen is someone who could very easily follow down Schlereth's path. Several mock drafts have Storen being taken toward the end of the first round and there is a rumor he could go as high as 10th overall to Washingto.  He could possibly help a big league bullpen as soon as this year. In 42.2 innings as the Stanford closer, Storen has 66 strikeouts to just 8 walks, showing an excellent combination of stuff and command.

You can see some video and read a scouting report on Storen here. He was nice enough to answer some of my questions over email as he's getting ready for draft day.

You’re obviously one of the top college pitchers eligible for the draft, and it’s been said you’re a lock to be a first round pick. Where will you be on draft day and who will you be watching with?

The plan as of now is to be with my family and friends in my hometown of Brownsburg, IN.


With most of the attention going to the starting pitchers, what do you feel like being a reliever in the draft?

I am in an interesting spot because most teams see me as a starter down the road. I like the position I am in because I can fit into whatever role a team would like me in.

How did stepping into a relief role come about? Were you initially for/against?

We had a great starting rotation at the beginning of my freshman season and we needed a guy out of the 'pen, so Coach Marquess asked me to do it. I was more than happy to. I love the high energy and high pressure that comes with closing.


How would you define a "closer’s mentality"?

It's pretty simple. You just have to try to minimize the game and win each pitch. You can't put weight into the situation at hand. You can't let the tight lead, runners on base, even the pitcher at the plate change your game plan. I like being an "offensive" pitcher who likes to attack guys and make them uncomfortable at the plate.

With three good pitches in your repertoire, I've read some teams view you as a potential starter. Would you like to be given a chance to start?

Absolutely, that is why I worked on my change up so much. I want to do whatever will allow me to help someone win on the big league level.

Some teams get concerned about the "signability" of a draft eligible sophomore. Being one yourself, would you consider going back to college if you don't get quite what you're looking for in a signing bonus?

Yeah, I see myself in a win-win situation, it would be great to start my pro career this year, but if I don't I get to go back to Stanford where I am very happy as well.


Have any teams taken a particular interest in you?

I have talked to quite a few teams, it's hard to narrow it down and say a certain have shown more interest than others.


I'm really curious as to what the recruitment process is like. Are there certain "tests" scouts want you to perform, and do you oblige all of them?

The only tests are personality tests, most teams have them, and I take them all, as time consuming as they may be.


Are there any pitchers that you really model yourself after?

I like the way Papelbon and K-Rod attack hitters out of the 'pen, so I try to carry that same approach. But I also love the professionalism that Mariano Rivera has when he rarely, if ever, shows emotion even after putting a clinic late in a game.


Do you put much stock in statistics and in-depth analysis?

Not at all, if I look at anything it is my K-BB ratio. I hate when I walk guys, I don't like giving free passes, I'd rather have someone earn it.


What's been the proudest moment of your career to this point?

Probably getting the two saves in the Fullerton Super Regional last year. It was a lot of fun being put in the high pressure situations on ESPN and helping launch us to Omaha.

Thanks to Drew for taking his time to chat, and best of luck to him in the draft.