Graph of the Day: David Wells vs. Mariano Rivera

Share All sharing options for: Graph of the Day: David Wells vs. Mariano Rivera

I read this story on MLB Trade Rumors earlier today, and was very intrigued.  Here's a snippet -

Former Yankees GM Gene Michael told John Harper of the New York Daily News that he considered dealing Mariano Rivera to the Tigers for David Wells back in 1995. Rivera was still considered a starter then, and he was one of the players the Tigers had interest in. Michael, now a scout, says he held onto Rivera because of his control and mid-nineties fastball.

Of course, this trade initially seems completely ridiculous.  Rivera is the best closer of all time, and while David Wells had some good seasons, he's certainly not on the level of Rivera, right?  Well, here's the career path for these two pitchers. 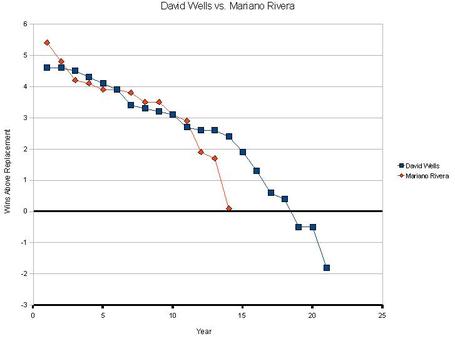 As you can seee, the best 10-12 seasons for these two are very, very similar.  Although Wells never put up the huge numbers of most hall-of-fame starters, he was consistently well above average.  Rivera simply could not put up  anything above 5.5 wins due to not throwing enough innings.  To truly see how even this trade could have been, let's look at their career year-by-year. 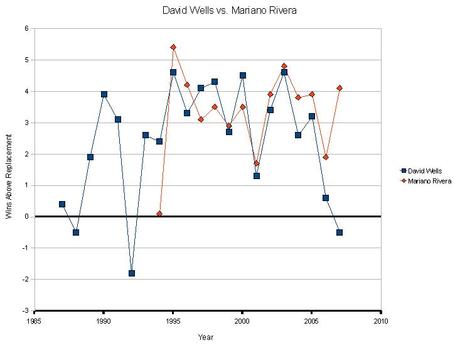 The similarity between the two from 1995 to 2005 is striking.  Hopefully this gives some idea of the worth of starting pitchers compared to relievers.